Kind of a lateral move. 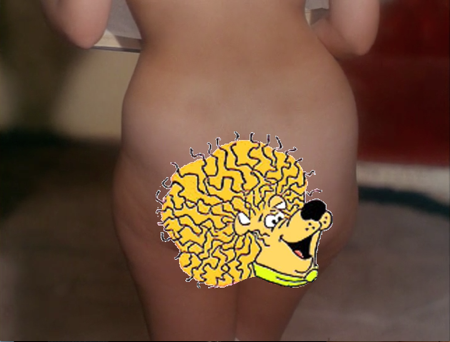 There's not a lot to hang comedy on for this segment, but, as I'm sure somebody from the peanut gallery will shout, that's never stopped me before.

It's basically 6 minutes of showering and another minute of bouncing walking up and down stairs.  There isn't even a Granny Good voice over.  As as if Creese just gave up and said "butts".  You want them, I've got them!  All types!  Shaky ones!  Big Ones!  Big and Shaky Ones! 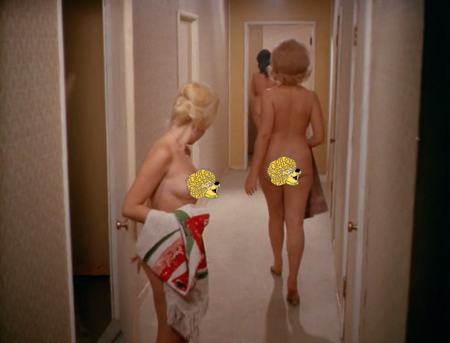 Our lovely ladies saunter from a nice hallway into a nice shower in a nice haunted house ... come on people!  We haven't seen Krakov the werewolf in a while, but we've certainly seen a lot of cracks!  I'm beginning to think the whole haunted house bit is just a ruse. 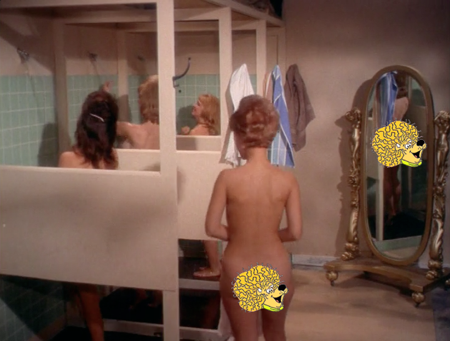 Thought I'd forget the mirror, didn't you?  No butts for you!

Here's a good place to tell a story, if anybody's made it this far.

When this film was screened in Boston, the chief of police thought he saw some pubic hair through the panties of a model.  He raided the theatre, smashed the projectors, and publicly burned the film.  Think about this: In a film dedicated to showing as many boobs and as many butts as you can jam into 60 minutes, the mere possibility of seeing pubic hair -- through the giant grain sacks they called panties in this film -- caused somebody to put on a spectacle for the press.

Creese phoned up the chief, threatened to sue, and got them to repay for everything and the film continued showing.

Note both Bob Creese and his dog were later shot by the police.  Would make you think if there wasn't more boobs to distract you! 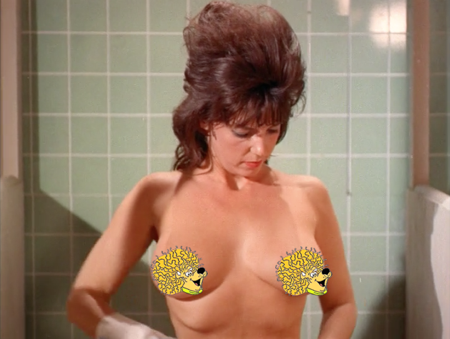 It looks like an emu decided to nest on her head.

Here our plot -- sort of -- comes back into focus.  No, it's not a group of hot chicks getting over their cleaning phobia (they do take a lot of showers, something that is to be expected in a haunted house.)  We get hints that there's going to be a party, and this allows our women to bound, though to be honest it's really kind of a hobble because of the high heels, down the stairs to use the phone. 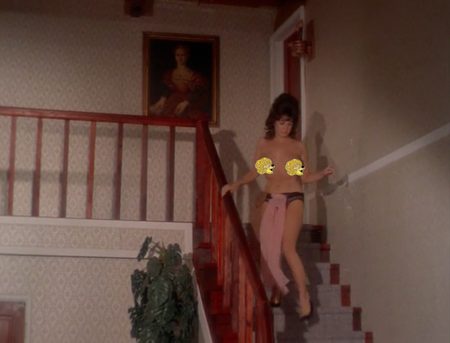 After my shower, there's nothing I love more than high heels and half a genie costume.

When they reach the bottom, they call up unspecified boyfriends and tell them to bring booze.  Probably in an attempt to black out the very memory of House on Bare Mountain. 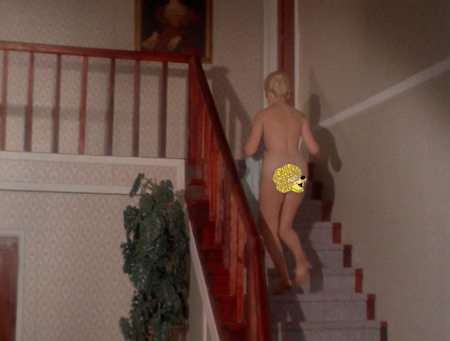 The really got a discount on that wallpaper!

Our women trot up and down the steps, and one mysteriously does it in a hula skirt.  The rest are tastefully nekkid, as my old southern neighbors used to say.

Finally, Frankenstein's Monster: Part 6
Posted by Brian Barnes at 1:18 AM