A Fling with Space Thing, Part 3

My last excuse for a late post was the polar vortex, and there's a new one this time: I moved from one house to another. It's almost as if nature and some type of deity was trying to deter me from watching more of Space Thing.

Well, screw you forces of nature!  Screw you infinite omnipotent beings!  I'm going to review Space Thing and nothing is going to stop me ... 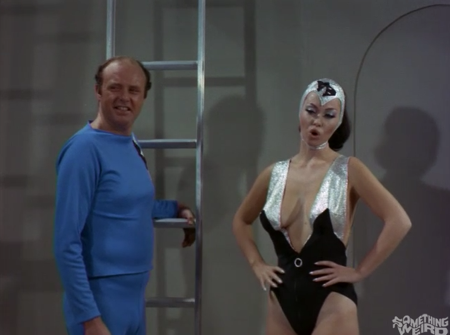 Examples of bumps in the wrong and in the right places.

Except Sir Flabby McDonut there.  Hot chicks in space bikinis?  Check!  What else does this production need?  I know, a guy with a lot of rolls squeezed into a blue tube sock.  Why other soft core productions didn't latch onto this brilliant ideal I'll never know! 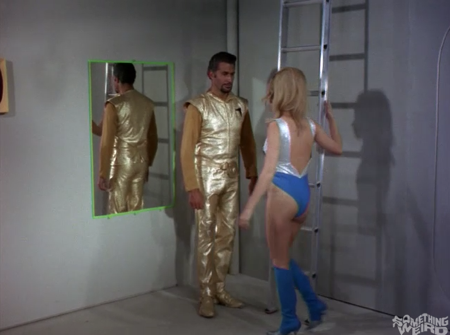 Soak it in, ladies, both front and back of our hunky lead!

The woman two pictures above is the captain of this ship, which really needs a good scrub down after all the sweating and grunting.  Everybody on this ship -- I assume a five year mission to boldly get STDs -- tries to make it with our in-disguise hero.  We meet another crew member that is either trying to get in his pants, or she's a hardware store employee telling a disco dancer just how much a bargain this aluminum extension ladder is. 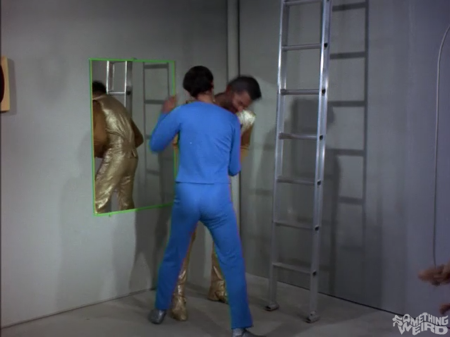 Maybe that butt is too well defined ...

It seems the blonde woman has a very jealous boyfriend who's in a real punching mood, driven slightly mad by the space mirror and space extension ladder.

Also, more than likely, the fact that his girlfriends instantly tries to jump a mysterious stranger that just appeared on their ship -- a ship that is about the size of a utility shed.

We here on Terra suck at security when sex is involved!  Wait, that's not a joke, that's actually true.  Political Commentary! 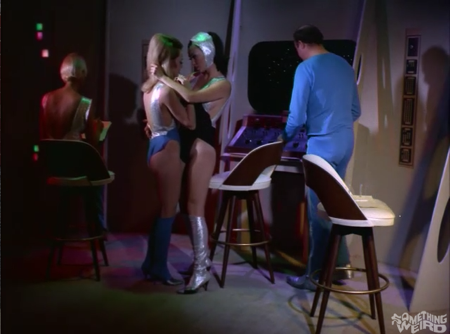 I'd be more excited about the lesbian stuff if somebody didn't roll that turkey stuffed into a 12-year old's blue jammies back onto the scene.

Our captain tries to re-assert authority by snuggling.  I think they tried this once in the Navy, or that just might have been a Village People song. 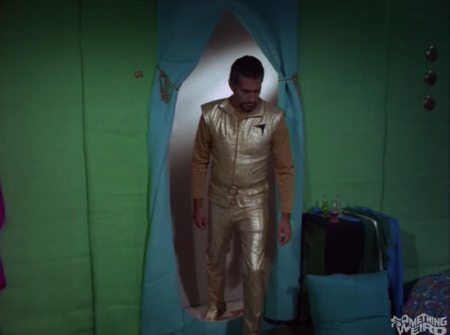 Held together by charged ion anti-grav beams and ties made of yarn.

Our hero, recovering from his vicious beating -- and in my estimation not vicious enough because he recovered to continue this movie -- begins to search the ship.  He stumbles upon the most secret of Terrian technology, the green and pastel-blue fabric drive.

What will happen next?  Will those gold pants chafe?  Will he discover the secret to the fabric drive, i.e., the foam-board center?  Or will there be more boring sex scenes?  Probably the later.
Posted by Brian Barnes at 12:16 AM