A Fling with Space Thing, Part 5

More Space Thing, and this time with actual sci-fi concepts and action!  Kind of.  I guess.  Your mileage might vary. 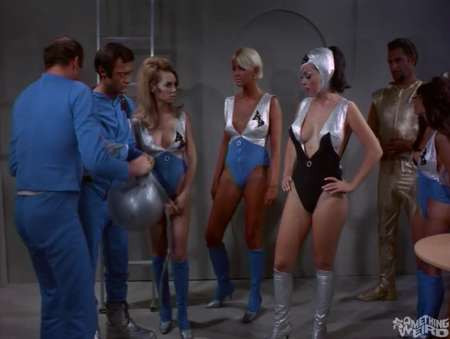 Somebody has been hogging the tanning booth.

Our hero has attempted the sabotage the ship.  Badly.  It's equivalent to attempting to stop a bulldozer by putting a 1/100th scale toothpick replica of the Empire State building in front of it.  It doesn't go well, but somebody is forced to go out the airlock to fix it, and it's Mr. Grumpy Pants misogynist.

For moral support, the most tan woman in all the universe shows up.  When she was a fetus she was gestated in an Easy Bake Oven. 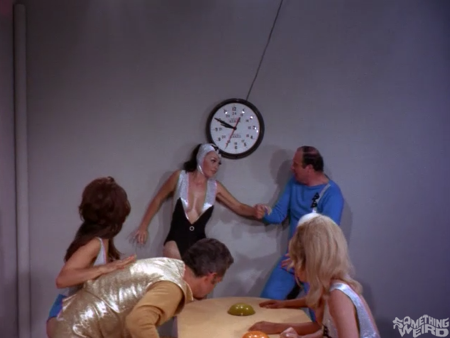 I can tell they are just moving the camera because the wigs are staying put.

Things don't go well for the crew of the SS Gray Drywall and we get the Star Trek-ian (I'm sorry to say this but my built in dictionary doesn't recognize "Trek-ian" as a real word, start a petition!) everybody leans left and right.

Luckily this ultra-advanced spaceship has the extra stability of gluing the bowls to the table.

And after that excitment? 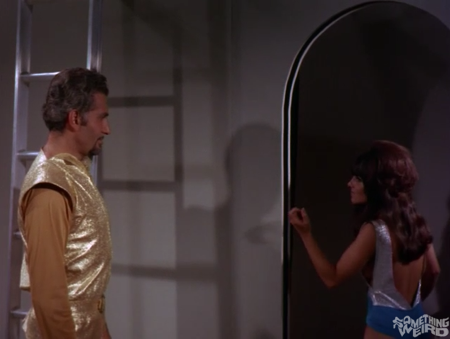 I like the space version of the lollypop guild!

After his heroic table grabbing, our hero is invited to the room of a woman who's height is 25% hair, and, for once in this forsaken movie, hair on her head and not a tangle of back hair. 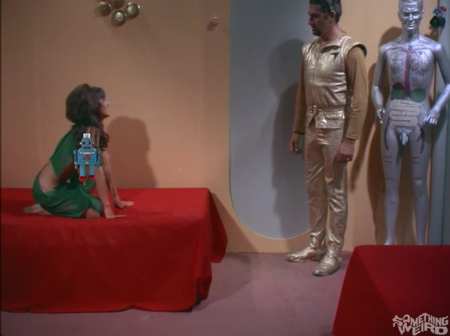 Slim Goodbody wants to get in on the action!

So our alien-in-disguise hero has to once again go through the motions.  This being a late 60s soft core film, everything just IS the motions.  Nothing goes in anywhere, if you don't count the bile pushing it ways up my digestive track.

Speaking of digestive tracks ... what the heck is up with the silly mannequin?  Did they really need to add some scenery that's made of plaster and out-acts the real actors?  It seems like a real jerk move! 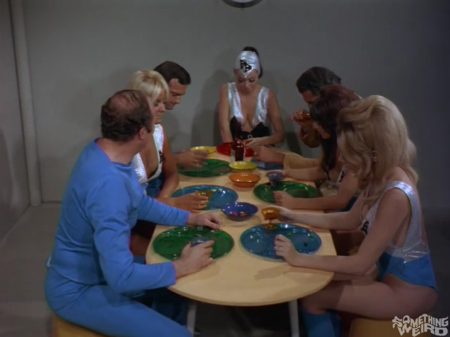 Who's turn is it to clean the space china?

Next, it gets more exciting.  There's an actual ray gun!  No, not the fleshy type.  The real toy-like plastic type!
Posted by Brian Barnes at 8:14 PM