Step back into the K-Tel No-Tell, and whatever you do, do not turn on a black light.  It's better to not know.  If it's still sticky, just imagine the people before you were eating maple syrup covered pancakes in bed.  It's better for everybody involved, including the health department. 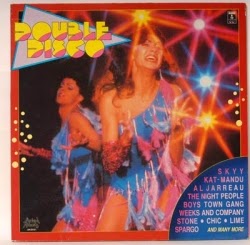 "The hamburger I ate was this big and I feel like I'm going to let loose out of both ends!"

Granted, I'm not a big disco guy.  Chic, I know, but the rest could have hit the dance floor under a neon sign and I would have still go "hunh, who" and "can you really heap cocaine that high?"  That said, "The Night People vs The Boys Town Gang" was one of my favorite 50s horror films, though the sequel, "The Night People Go To Lime Spargo" was pretty lame. 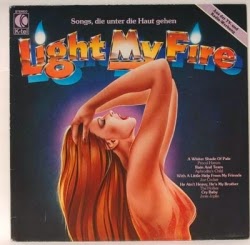 I'm not lighting the fire of any woman with 8 feet arms.

Again, I have to wonder about the people -- yes, I'm being generous here -- that designed these cover titles.  The dual flames weren't good enough?  The high-shine liquid-gold metal font wasn't enough? The gradient drop shadow wasn't enough?  Where does it end?  One more odd font choice -- like the Y crossing under the M -- is the way madness lies.

The rough translate of the phrase above is "Songs that Get Under Your Skin."  What, no!  That does not seem like a pleasant listening experience!  I want the songs that I listen to, not ones that invade my body like a million sonic ticks. 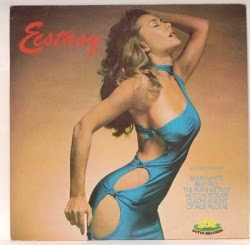 Here we begin a mini section of broke-back poses, a comic concept where a woman is bent in such a way that you can see both her boobs and butt. This is probably the best a real woman could do, even when moaning either in ecstasy or because the cold medication just kicked in. 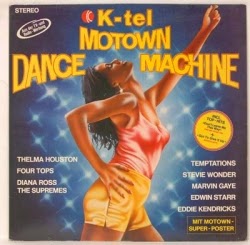 ... but this is truly a lost opportunity, as we don't have a full butt.  At least the artist made up for it with the expertly illustrated nipples through her aluminum foil top. 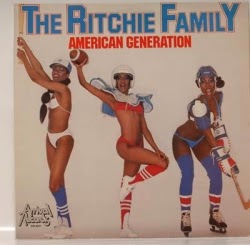 I might have to start paying attention to sports.

This is, obviously, the Ritchie Family, a disco group put together by the same producer who put together the Village People.  The group had a revolving line up of female singers, none of whom were named Ritchie, and went from elaborate disco costumes to more traditionally sexy costumes.

Remember, this is the disco era.  Everybody went to bed with everybody else, and everybody had a water bed.  Please, remember to leave the cleats at home!
Posted by Brian Barnes at 8:55 PM