Thanksgiving from the Hell Mouth

Today, the gates of the Hell Mouth have swung open, pouring the very taint of evil upon the streets of New York.  Saints and sinners alike wail in agony as these horsemen of the devil himself float down the streets. 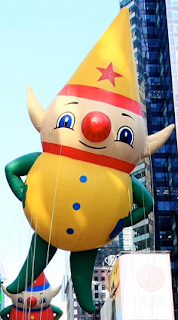 The Elf of Wickedness

This fellow is very happy to be doing the dark work of his master.  That nose isn't normally red, it is the screaming red flesh of the innocents.  The ears are terrible weapons to rend and tear all who tread in front of his glare.  The red star?  Well, OK, that's just a decoration.

Sometimes you guys expect a little to much of evil. 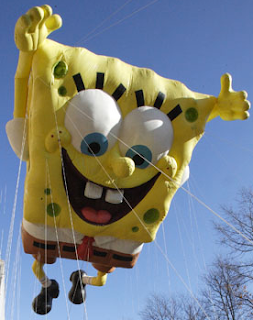 The Sponge of Satan

This yellow bringer of fear can absorb water and the tears of the crying souls damned to hell.  Also a snappy dresser.  It's greatest weapon is the ability to continue on producing new cartoons even when every permutation of every joke has been done to death.  Even Scooby Doo added Scrappy with less boring predictability.  See: The Simpsons. 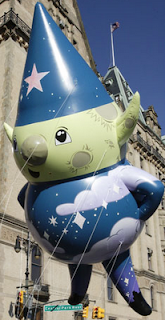 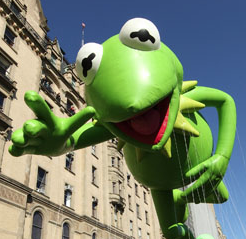 The Frog of Fear

This beasts will utterly destroy all living things on sight; it baths in their blood and dines upon their entrails.  It shows no mercy for any reason; it is a remorseless killing machine.  It claims that it never associated with Elmo.  There are some things even a murderous engine of death won't do. 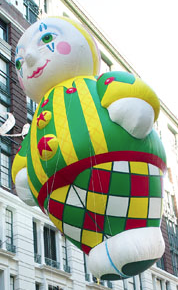 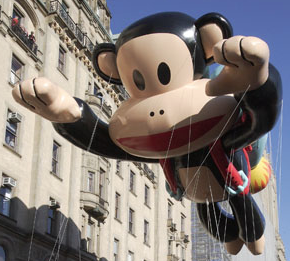 Probably the most insidious evil of all of Satan's shock troops, this monkey will appear before you, silent, and unmoving.  It will wait.  And wait.  Eventually, you'll be forced to make a predictable monkey joke (poop throwing, scratching butt/smelling finger) and then it will disappear, leaving you will the knowledge that you've been forced to make the same cliché monkey jokes that everybody else makes.

Not that we'd do that.  No, we found the what we think is the most preposterously clever way to do it.

Just agree and let us have our small victory. 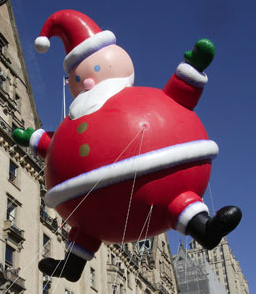 Full of alien brain worms, this bursting mass of parasites will wait until it's around the larger crowd, then will explode and divulge it's grisly cargo ala Night of the Creeps.  Haven't seen it?  You will. 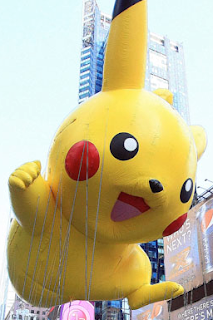 Finally, the last of Satan's dark minions will descend upon those that remain; already devoid of all hope, these bloody masses will finally beg to any god to save their souls.  The Hell Beast will look upon them and cry no; for I must collect them all.