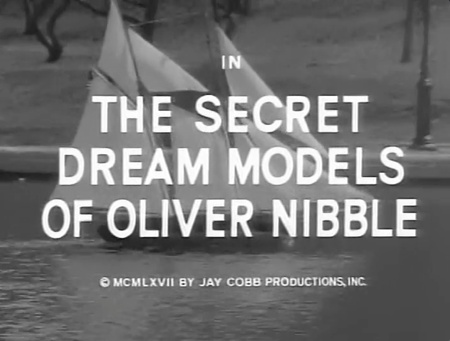 Shoot quickly in Central Park and no permits are required!

This boob-filled lift of The Secret Life of Walter Mitty starts out with a pleasant pan through Central Park in NY, while the soothing sounds of a calliope full of cats being run over by a cement mixer merrily plays in the background.

This short stars Dick Van Patten, in either the low or high point of his career depending on how you view Love Boat, i.e., does your hate burn red hot for it or does it make suicide by rabid woodchuck seem like a sensible way out?

Dick stars as Oliver, a hen-pecked husband with a shrew wife who dreams of beautiful women being at his beck and call.  Just like Love Boat with ruffies. 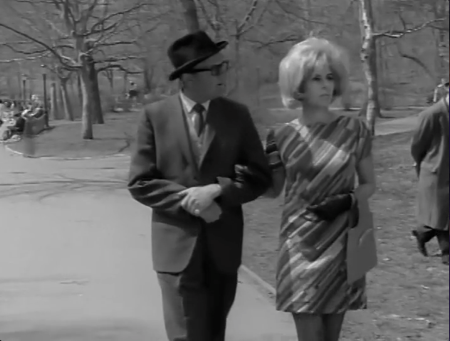 Oliver really shouldn't have skimped and got his wife that cardboard purse.

Let's meet our lovable loser and his domineering wife, Clarabelle, a women and not a strange cow creature with big eyelashes, and who won't let poor Oliver cavort around with naked 20 year olds, the damn dream-stomping bitch!

What's her problem?  It's just innocent fun!  Frankly, what kind of change could come over Mr. Nibble that would cause her to have this adamant stance? 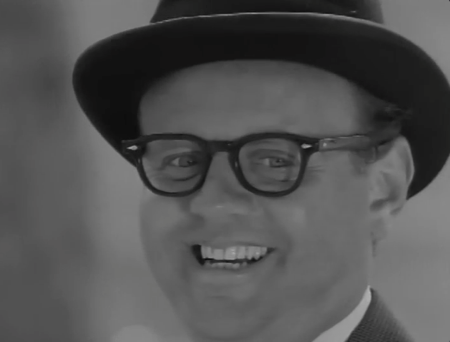 Spoiler: When in Hell, this is what's behind the seventh gate.

What's that thing all the hip kids say on the internet?  Oh, yeah, I remember: 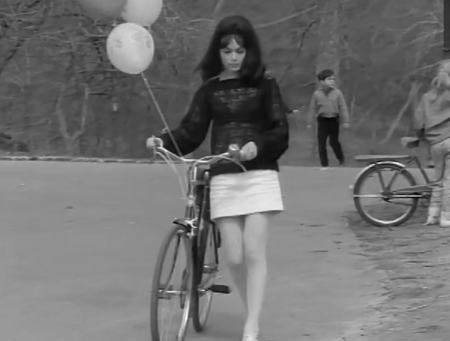 She keeps an extra bicycle rim in her hair, for emergencies.

Our first lovely lady just got back from her job as a children's birthday party entertainer, using her favorite trick which is giving the kids a reason to sing the "I see London, I see France" song.  Lucky for her, she's looking our way and not noticing the incredibly creepy person behind her.  "It" looks like a 12 year kid with a noggin 3 sizes to big.

I'm not going to say "proof of aliens" but, well, if that head splits open and brain-controlling slugs pop out, ala Night of the Creeps, I wouldn't be surprised. 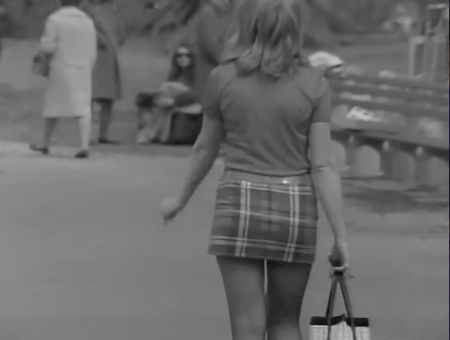 The clan for that tartan went into hiding and was never heard from again.

Here's our second hot babe, and we are starting to see the low budget of this short.  Couldn't they find a women without elbow wrinkles?  Gross, right?  What is she, 82?  It's disturbing!

If you haven't already noticed (and you might not, if you've been converted into a slug-controlled alien slave), everybody else in these shots are wearing coats.  There's probably a good bit of a cold breeze blowing up that mini skirt which I'd say is a bit unsexy -- but this is the internet and for sure there's some kind of strange tumbler for it -- one that I think viewing would feel a like wading through lukewarm sewage with the consistency -- and color -- of chocolate pudding. 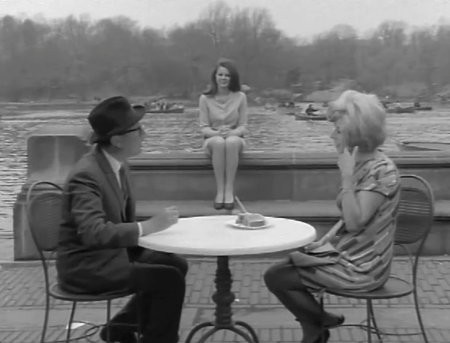 This scene has excellent composition.  That's it, no snark, I was sort of stunned when I looked back at the screenshot!

Was there a time when boating in any New York waterway was a good idea? 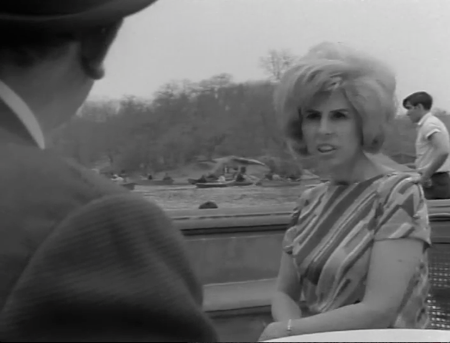 It's nice to see Tommy Shaw branching out into acting.

Clarabelle becomes very angry and removes Oliver from his sight seeing of rare birds (it's a useful term in case I need to hit on a hot time traveller from 1862) and down the street to a movie theater showing an "art film."

What could happen next?  Will you tune in for part two when I didn't even show the goods in part one?  Of course you will, that tumbler you found earlier just didn't do it for you, and, in part two, glorious color.

Yes, it's the Wizard of Oz with a lot more than curtains pulled back.