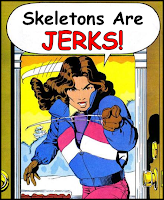 Interesting programming note:  When I first embarked upon this idea of a month of pre-code skeleton comic covers, I was a little worried about this becoming a bit too rape-y.  Silly me, as it turns out, I didn't need to be worried at all... 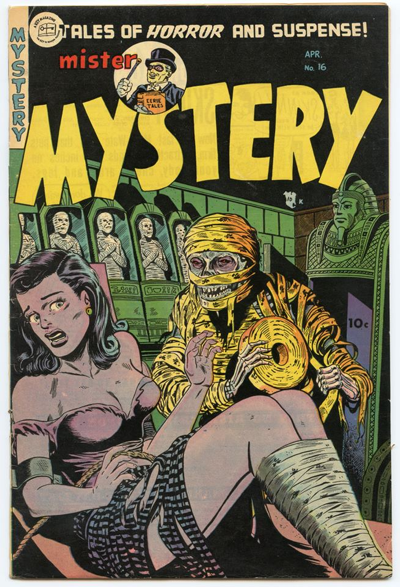 Oh come the hell on!

Here we have another example of the comic phenomenon: sticky boobs.  No matter how much a dress is torn, it always manages to stick to the breasts.  Even if there's absolutely nothing holding it up -- something the mummy and his jumbo-sized roll of masking tape is attempting to fix -- the dress just refuses to follow any laws of physics.

Just like the arm clamp.  Explain to me how that works, and while you are at it, explain how one side of the table is curved and the other isn't.  Explain how the rope works on her left side ... is there a hole in the table?  Explain the artist's resume -- "good at leggy dames, mummies, and bondage."

Why is she so scared?  Its obviously tape and not bandages covering that mummy.  One good yank and it'll be on the floor howling in pain.  Take that opportunity to kick it in it's mummified testicles.  It's what rape mummies deserve.
Posted by Brian Barnes at 10:00 PM

Email ThisBlogThis!Share to TwitterShare to FacebookShare to Pinterest
Labels: Halloween 2013, Skeletons are Jerks

Lots of illogical stuff going on here. Seems like this lady is quite diwitted, to begin with. And I really don't think the mummy plans to rape her, since he is apparently going to wrap her up even more!

Those are the worst woman lips ever! But, the rest of the body is great. In fact it looks like they used a guys head and just made the lips puffy and extended the hair.. curious, did artists ever fall back on such a plan if they needed to get a cover done?