When we last left our heroes, they were planning how to get equipment and women for their movie.  That's what we in the business call a macguffin, which is a device to move the plot along, or, in this case, the plot itself is a macguffin to drive us to the boobs.  As a macguffin, that's equivalent to the Maltese Falcon, right?

This is why I flunked out of film school. 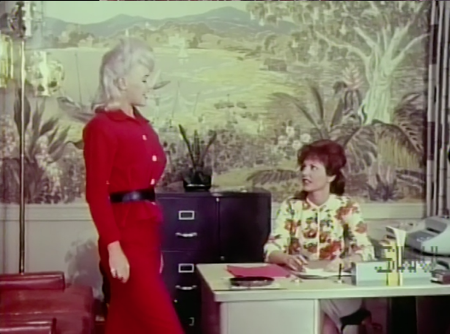 There's "platinum blonde" and then there's "scared by a ghost blonde."

Our first lovely lady shows up at the offices of our ad copy artist, and says that she's out of photos.  She's sold them all, so she'll have to just "show" the secretary.  In the 60s, we call this comedy.  In the 00s, we call this inappropriate workplace behavior.

Have things gotten better or worse?  Well, nobody is showing breasts in offices, but then again, nobody is dyeing their hair the color of flour, so I guess it's basically a wash. 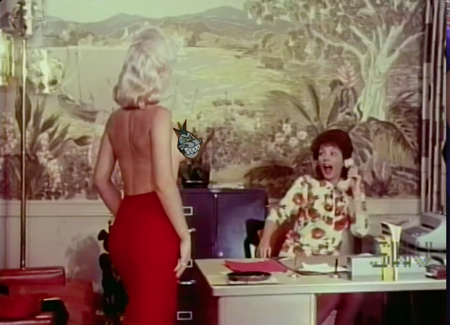 She's not a prude, it's just the cat suckling on the third nipple was a bit too much.

Comedy, boys and girls.  Comedy.  Or a close approximation.

Did people in this office have to fight over who gets to have their desk near the mural?  And did this woman lose?  That thing is painted in the most dull browns imaginable and looks like a Jurassic landscape painted by a slightly drunk apatosarus. 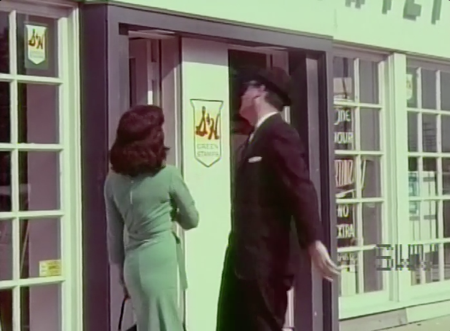 They don't take no gruff at the S&H!

Lewis and Friedman give us a glimpse into the nudie filmmaking process. 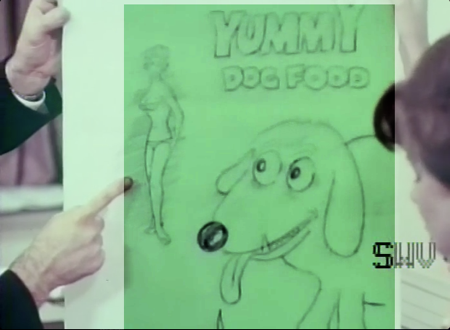 No joke: That's exactly how I draw dogs.  Honest.

I enhanced this still because it was really washed out on film.  The same secretary from before tells our ad artist that he's been -- by mistake -- drawing hot women on his ad copy.

And now, some honestly from this blog author.

I laughed my ass off at that.  The rest of this film can suck, but the expression on that dog is just wonderful.  The impossible balloon like body, the drop of drool, and the fact that nobody cared to spend a minute to come up with an actual dog food name made this something spectacular.

I could put down this blog right now and never do this again.  I know you want me too, I know my mental health wants me too, but the prison board says I have to finish my obligation.  That's what happens when you burn down the film school for rejecting your Maltese Falcon essay. 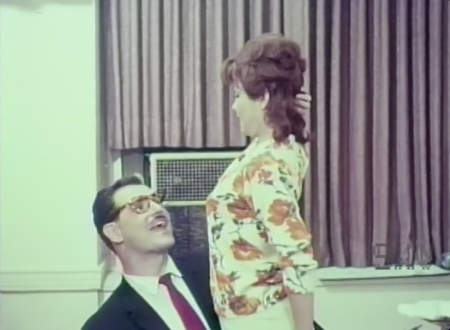 Nobody wears a plastic table cloth as well as you!

The secretary informs her boss that she'd like to be in his movie, and he's overjoyed at the prospect of an actress that is fresh and therefore doesn't know the pay scale.  You'd say, "how do you know that", and I'd reply "look at that mustache."

And now, it wouldn't be a 60s nudie film without the ol' stand-by: 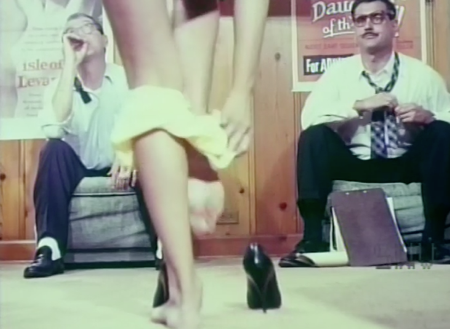 Sign of a good actor: Knowing when a scene calls for the look of slight boredom.

Available in large, extra-large, 8-camper tent size, and made with the finest of burlap.
Posted by Brian Barnes at 5:52 PM