The next couple of segments are so funny that you will laugh until you cry.  Note that you might skip one of the steps there. 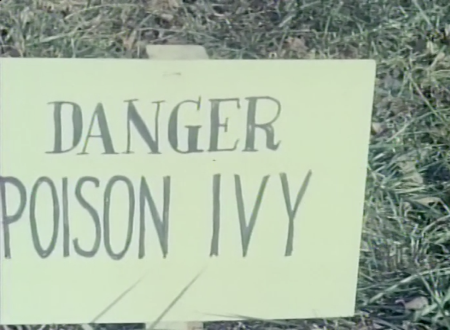 I can't believe they used a serif and sans-serif font on the same sign.  Shame!

What follows is a workshop on the fine craft of comedy writing.  You have the setup, than you have the joke.  The setup isn't that the Batman is taking his war on crime a bit too far, but that our babes are about to encounter a plant that produces toxins that basically makes you break out in blisters, and can actually cause asphyxiation in a small bit of the population.

So, we have the setup.  What's the joke? 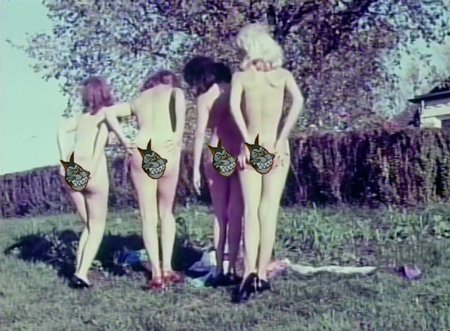 Well, it's a fetish for somebody.

Painful, itchy rashes on the tuccus.  The film makers actually painted something red on their butts, but I think the bad pantomimed scratching was enough of a give-away.  Or they were turning into majestic red-butted monkeys.

All in all, about as painful to watch as it is to itch. 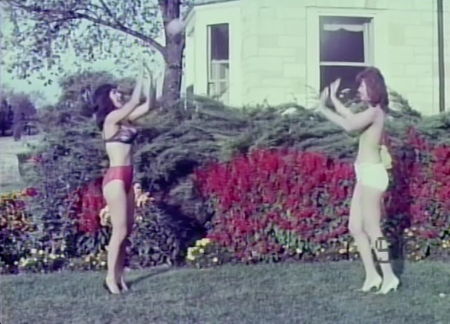 We only wear our best heels when playing ball!  Wheeee!

There's an extended scene with these two ladies playing ball with each other.  It contains one of my favorite pet peeves about these movies (I'd like to pet the women and they'd be peeved if I tried) ... the heels.  These aren't the kind of 6 inch stilettos you see now-a-days, but they certainly aren't regular ball playing footwear.

I want to make a quick point about the hedge, which looks less like a hedge and more like a pile of salad fixings for a really hungry hippo. 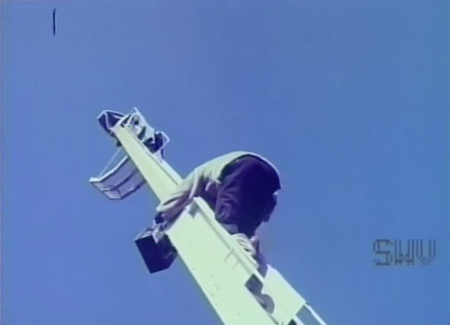 Johnny LaRue couldn't get this, but these jokers do?  No justice!

The next bit involves a crane shot with another predictable joke (the crane falls, ha ha, major bone and organ damage!)  But it's a real shooting crane!  Those things aren't cheap, so much that SCTV pretty much spent an entire episode complaining about it.

Welcome to shooting a quick cash-in movie in the 60s.  No safety harness.  Using one hand as the other is holding what is a pretty heavy camera.

And what was all this for? 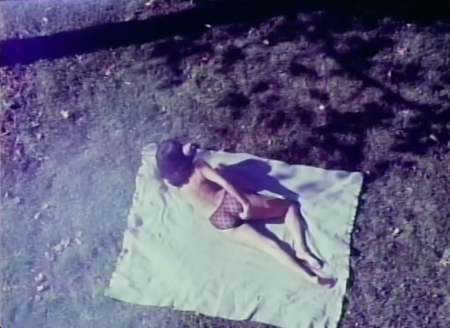 It's really jammed up in there!

Yes, it's what it looks like, they left in a scene where the woman picks the panties out of her butt crack.  Lewis and Friedman will leave no stone unturned -- and no wad of synthetic material jammed so far up a woman's crack that it's tickling her nose hairs -- in the quest for sexy. 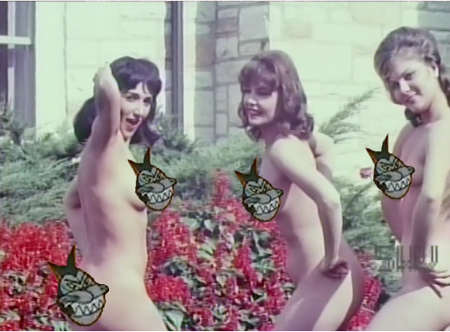 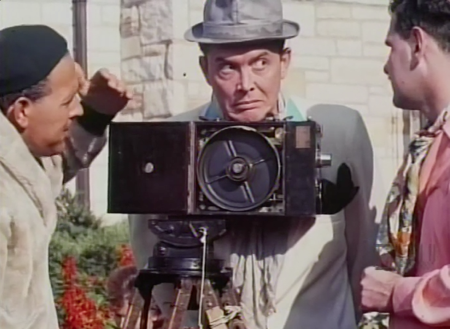 We're making what kind of movie?