You know when you buy an old house and some fool painted over the beautiful moldings, and then when you go to strip the paint a spooky voice tells you GET OUT?

This is not that kind of spooky stripping, but it's about the same amount of pain as getting the stripping agent in your eyes and then the heat gun stuck on high down your pants. 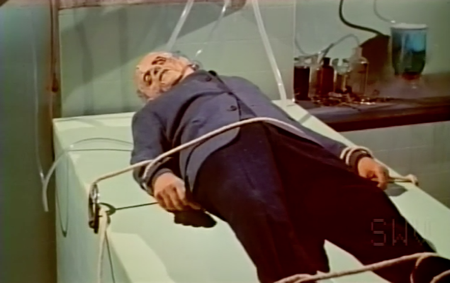 That is one piss poor Frankenstein Monster.  He's tied down with ropes that look to have the strength of very, very old spaghetti, and it's probably for his own good.  Too sudden a movement and he'll probably melt.  Luckily the melting is being kept at bay by the aquarium tank tubing.  It's not Dr. Frankenstein's lab but the fish section of the local pet store. 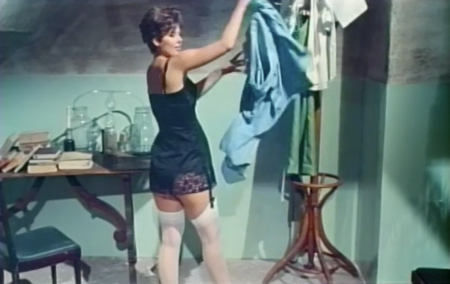 Our nurse is closing up shop for the night, and yes, there was no nurse in the book or movie, but we have to take liberties here because this is a stripping film and nobody wants to see the monster with it's top off.

I suspect it'll be like looking into a pot of pudding made from 10% milk and 90% snot. 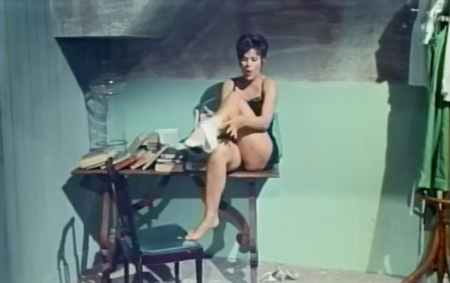 Taking off a stocking really isn't an "oh" moment.

I adore the concept of this short -- that a nurse would see that monstrosity on the table and think "it looks like it has the strength of ten men, or at least ten pudding men, and it's held down by moist twine.  I think I'll tease it!" 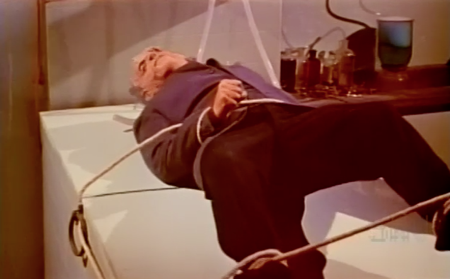 If only I had monster strength, then I could snap these ropes!

And the inevitable happens.  The monster realizes that he's probably going to spoil in a couple hours, so he might as well break the licorice ropes holding him down and see what all the "oh" and "ah"-ing is about.  He's going to be disappointed when it's just some goofy lady changing her stockings. 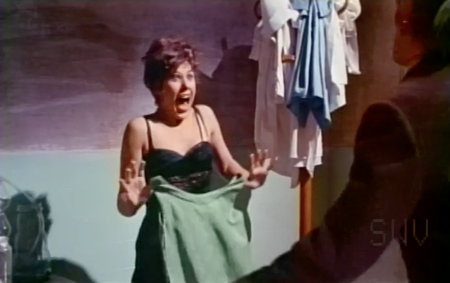 Gee, what did you expect?  Our candy stripper manages to get a sedagive sedative into the monster and he returns to that sandy stuff they make instant pudding out of.  Oh, and side note to nurse: Do Not Tease Dangerous Monsters With Your Lame Strip Tease.  Thank you.

That's it for Spooky Stripping -- for now.  Yes, there's more monsters & strippers action out there.  It's a rich vein of stupid, and I'm just the guy to mine it!
Posted by Brian Barnes at 11:22 PM