Simon Bar "Cinema": Not of this Earth

Yet but another 80s T&A movie.  It's a dirty job, and somebody will get stuck in the muck and the mire doing it. 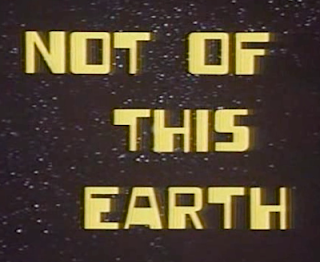 Not of this Earth

Featuring Traci Lords, America's hottest underage document forger, Not of this Earth is a remake of a 1957 Roger Corman film.  That should be a giant red flag the size of the Bismark.  The director had a bet with Corman that he could film it in 12 days -- and came in half a day under.  That should be enough red flags to fill the flag corps of a marching band.  Watching the movie itself is the final flag, planted right in your head, and embossed with 90 wasted minutes and endless days of regret.

That might be a little exaggerated -- the movie's only 80 minutes long.

One thing Corman couldn't do in the 50s that was required in the 80s was the T of the T&A.  And I'm not talking toes, tonsils, or tender vittles.  Lords -- and hopefully her documents were in order this time -- is either dressed as a nurse, in a bathing suit, in lingerie, or post-shower naked with mysterious disappearing and reappearing heels.  Must be hell on the shower tile.

The films opening titles are that most low budget of hallmarks -- interspaced scenes from other films.  There's some Alien rip-off, some Star Wars rip-off, and a rip off of everything Sid and Marty Krofft ever did, plus extra eyeballs on stalks and puke. 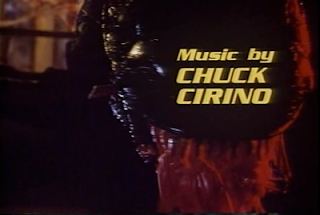 When Chuck Cirino saw where his credit was displayed he
threatened to take his synthesizer and go home.

The plot involves space vampires who want blood but seem to instead constantly run into boobs.  Wars on their planet have left their blood in the state of decay, and their glorious leader Greg Allman demands blood and the banning of all peach-laiden delivery vehicles [too easy, too mean, and probably too obscure].  Eventually a hottie female space vampire joins our crew.  Guess her breast size.  Did you say large?  Do you understand this is a blog and you can't really answer questions by screaming at the screen?

This film tries to convince us that Roger Lodge is a sexy leading man.  I was more willing to swallow the space vampire plot.

Eventually the vampire invade a clinic, and the female gets blood infected with rabies, something every doctor has a refrigerator stocked with, evidently to study the oatmeal-faced side effects.  She beats up some stereotyped punks.  It's nice to see them stereotyping a culture instead of a race ... progress! 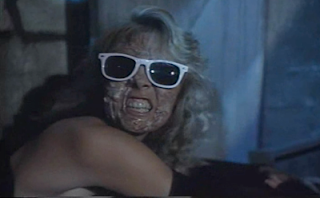 The ending features lots of violence against mailboxes, garbage cans, traffic cones, and my very soul.

One part features three prostitutes lured into a basement to be fed upon.  Two take off their tops, but the third one only removes falsies.  Is this comedy?  I'm not sure, but it makes me want to close up all the vents, turn on the gas, and stick my head in an oven.  That's comedy, right?  Listen "Third Hooker" (no kidding, it's in the credits), this is a later period Roger Corman film, honestly, you were hired for a reason, and comedy wasn't it.

One interesting part, the prostitute screen left (ask your local hooker for a screen left, it'll cost you $50 but its well worth it) is Ava Cadell.  Who later went on to get a doctorate in psychology, wrote many books, seems very knowledgable, and made a career out of being a sex therapist. 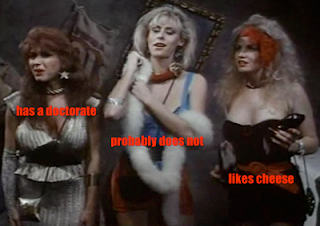 Everything the authorities told you was wrong!

Next time somebody tells you women who strip in movies are drug addicts with daddy issues, here's your counter-example.
Posted by Brian Barnes at 10:48 PM