Uh oh -- looks like them Duke boys got themselves into a heap of a mess of boobs!  How will they get out of this one?  Y'all come back now, ya'hear! 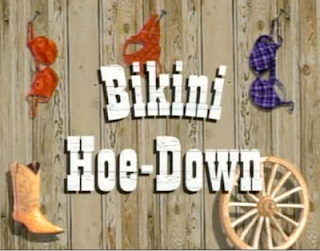 Set oven to "why did I watch this?" and in one hour and 30 minutes you'll have a heaping, steaming pile of garbage to choke down!

Bikini Hoe-Down sets the tone quickly with the first soft-core scene at less than 2 minutes into the movie.  This stands as the new record, right next to this movie's other record: the fastest I regretted hitting "play" which comes in at 3 seconds.

The action really starts when we get to cliche-ville: 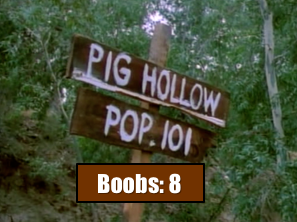 I've seen a couple of photoshops in my days and this definitely looks 'shopped!

Oddly enough, most of the action takes place in "Ghostly Gulch", which is supposed to be haunted by a ghost but it turns out to be just this guy: 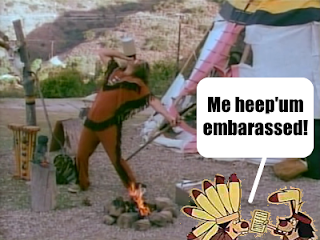 What is it with these bikini movies and racists depictions of Native Americans?  The Great Bikini Off Road Adventure did it, and anything worth doing once is worth overdoing to the point where the Go-Go Gophers want to end it all by throwing themselves down Klondike Kat's gullet.

I want to point out that this characters name is Crazy Joe and his entire arc in the film is drinking fire water, going crazy, and stealing white people's stuff.

... and they think he's a ghost ... and he's really just a dude named Otis ... and he magically fixes all the plot threads in the last 30 seconds of the movie.  Where's the Pet Cemetery type vengeance when you need it?

Did anybody sleep on any of these decisions?  I mean, outside of how they got cast?

The heroines of our film are the "three season" bikini girls and a feisty hillbilly chick, who even though she's never been party to any plumbing advances since 1890, managed to find the best breast enhancement surgeon in the Ozarks.

I've listed their names the best I can remember them.  I just saw this thing 5 minutes ago and either this movie or the pummeling Under Dog gave me this afternoon has really damaged my short term memory!

Other characters not shown: who cares?

This might seem like damning with faint praise -- and believe me, my #1 choice was damning with a rain of hell fire -- but this movie has a pretty complex plot.  Sure, it boils down the same as always: evil corporate guy tries to take family farm/business, saved by bikinis ... but there's a lot of additional plot threads.  Not additional good or necessary plot threads, but certainly more.

This isn't even counting the bizarre sub-plots, like the hippie who secretly loves the hillbilly and is painting a picture of her.  It's the longest running and most predictable joke -- yes, the picture will turn out horrible!  We know!  Stop fake painting it!  Go back to the old guy drinking moonshine, or the bumpkins that deliver it in milk jugs with "100% shine" written on it, or the Sheriff and his teddy bear, or the same two cars chasing each other down the same road.  I'll even take the chicken stealing!

Did I say a lot went on?  I haven't even scratched the surface and I'll avoiding doing that as breaking the skin of this movie might give me a staph infection.

The name of the villain is Snively, but in this movie everybody says Snidely, as in Snidely Whiplash.  With a name like Snively, what other career opportunities do you have open to you?  Evil deed-grabbing-nuclear-waste-dumping banker is all you've got.

Out of all these movies, this one actually had a bit I liked.  It was an extended sequence of our cast being knocked down by goats and some pretty testy sheep.  Do I have a new predilection forming?  If so, some producer is getting the bill for my therapy session!
Posted by Brian Barnes at 11:35 PM