A Breather with Brian Blessed

This current review isn't going so well, is it? 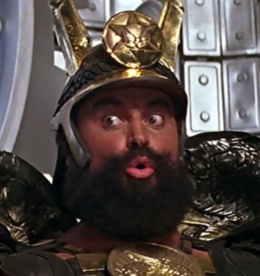 Well, you have nothing to fear as I, Brian Blessed, or just a poor parody of such, is here to give you a slight breather from all the bad puns, naked women, and seizure inducing green lines.

I myself was once in a strange nudie comedy movie!  'Tiz true!  Right in between two of my more famous works, Brian Blessed Screams Until Barren Women are Fertile and Brian Blessed Screams Until Grown Men Crap Their Pants.  A wondrous time of my career!  Many bears were fought, including the ones with skull-mounted machine guns and cybernetic war implants.  All fell before my crushing might and melodious voice!

But I digress.  Though I can.  International law has many special sections for I, Brian Blessed!

This movie, Brian Blessed Screams the Panties off of Many Chicks was not the box office bonanza I am normally used to.  Still, it's no where near as awful as Miss Nymphet's Zap-In.  Still though, not as terrible as the bearded stink-burger that was Brian Blessed Screams at Tiny Hamster Until They Explode.  That one did terrible for the 8-12 demographic!
Posted by Brian Barnes at 12:38 AM