Guess what -- Miss Nymphet's Zap-In isn't done with the rape jokes yet!  But to show the kind of expansiveness you'd expect from a nudie version of laugh-in, the movie has kindly added racist, gay-panic, and misogynistic jokes!  It's a full-house of crap! 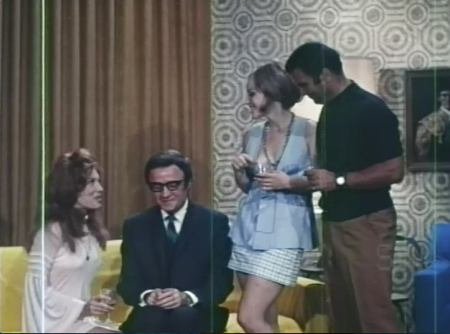 This is the 45th time we've seen this room.  There must be fluid on every surface.

We are leaving the 101 jokes books behind for this segment because this is where the movie really starts to get funny.  I should note that I just swallowed a bowl full of peyote cut with lye, so that might have had something to do with it.

This gag involves a couple deciding to swing with this other couple.  As it turns out, the two women pair off, and the skit ends on "I wonder how the boys are doing."  Probably pretty well -- they aren't naked on camera rolling around on a floor which is probably stickier than oozing sore day at the local strip club. 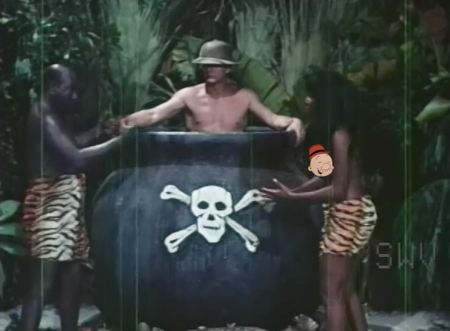 Anthropologist are now sure tribal societies painted skull and crossbones on their cartoon pots.

Our two natives have an argument.  It ends with the female native saying that "he can have the soup, I just want the bone", and then she tries to climb into the pot.  The guy tries to pull her in.  They fail.  They are both defeated by a paper-mache pot, and apt metaphor for watching this movie. 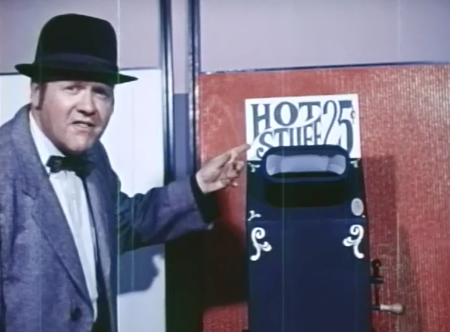 The quality of signs on American Pickers has really gone downhill.

An extended sequence has a guy constantly stuffing quarters into a nudie roll box to see the entire roll.  He puts about $1 in the machine, way, way, way over paying for the "hot stuff" content, where nothing hot happens and absolutely nothing gets stuffed anywhere. 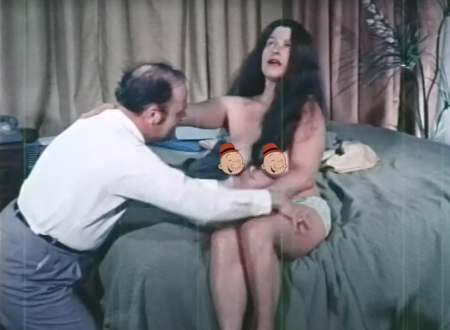 She's got enough hair, can't she loan him some?

Our viewer gets to see the most drab nudie roll ever.  Curtains the color of ashamed dirt, bed sheets the color of mint mold, and a plant threatening to die even though its made of plastic.

Our actors are a curdled pudding in the shape of a man and a woman whose concentration on the scene is so poor you'd swear she's running "The Wheels on the Bus" through her head. 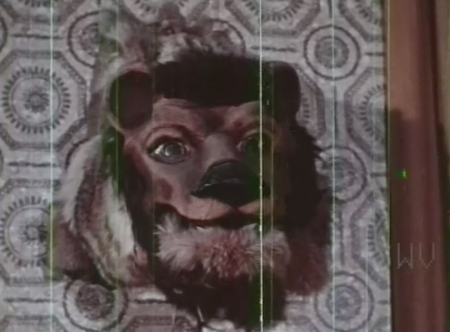 This joke, and I use that term loosely, is supposed to take place in a big game hunter's parlor.  It's realistic if the big game he's hunting is in the children's Halloween costume isle at the local Costco.  At least we get a good look at the ever present wallpaper, and it's unique why the hell isn't this on the floor it looks like floor tile design.

Like the Wizard of Oz, the corny lion mask really wishes it had a heart, so it could rip it out and not have to watch the rest of this movie. 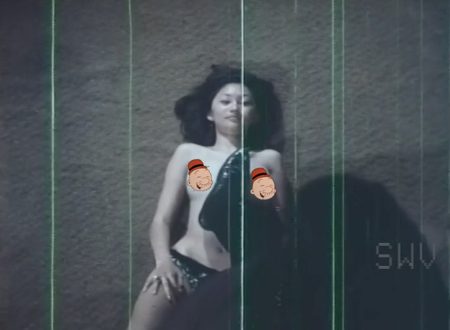 Yes, it's a man stepping on a woman.  There's a joke.  It's not worth repeating.  The thing about this is at least we know the movie can't really plumb any further depths ... can it?  It wouldn't, would it?  And with all this text setting up the joke, you know what's coming next: 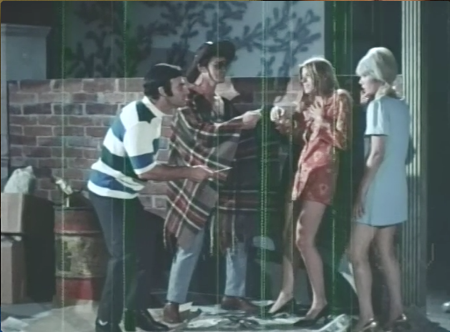 It's terrifying to be raped by The Monkeys.

Here's the joke.  They get raped.  Ha ha.  Hardy har har.  I should note that the first woman goes "Please Lord, forgive him for he knows not what he does" and the second lady -- who's liking the rape -- says "well mine knows what he's doing!"

It doesn't make this bit any less offensive, but I really can't get over how much our two rapist look like The Monkeys -- as if they just took a break from filming a broad and racist Mexican character sketch for a quick rape.  Peter needs a fix and Mikey is really going to stick a pig!

That's going to bring in some bizarre google searches ...