I'm pretty sure -- or maybe it's wishful thinking -- that I have at least a couple regular readers.  Here's where I lose them. 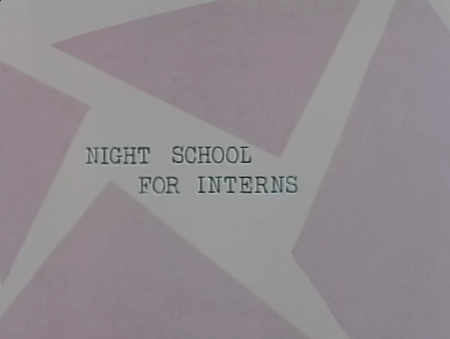 Title card by the Escher Antelope.

Night School for Interns is, as you could probably surmise if you've read this blog before, a 60's nudie film.  It's later period, so there's some pubic hair, but absolutely no sex.  What it lacks in sex it makes up in leering.  And rape as comedy.  Editing by Tommy, the blind, deaf, and dumb boy who could play a mean game of pinball.  Oh, and this:

This music plays under the entire 10 minute short.  It sounds like a mix between something Darth Vader would force choke a general too and circus music composed by the inmates of an insane asylum.  For the full effect, listen to it on a loop while reading this review.  Make sure you first sign over your life insurance to me.  I suspect some of you won't be making it out alive.

For bonus points, try to make love to somebody while this music is playing.  Nothing says sexy like an anthem for storm troopers! Grandpa, I drew a picture!  Hang it on the fridge or use it in your movie!

If you aren't an atheists yet, the fact that your computer didn't just get hit with a lightning bolt should tell you something.

The less said of the rosy-cheeked demon with a flower of blood for a hat and fingers for a neck, the better off we will be.  A warning: if you are already horrified over this ghastly art, then you might want to turn back before part 2.  It gets worse.  First, though, more credits! 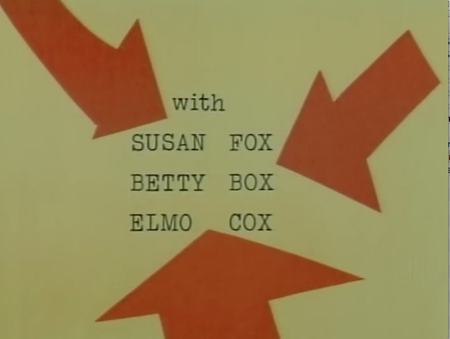 Oh, look, nobody wants to put their real name on this thing! 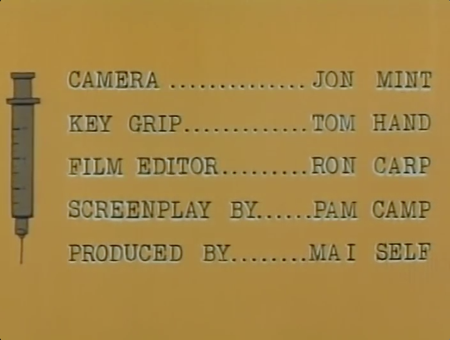 Finally, a brown with the right shade of puke!

More comedy names.  I know what you are thinking, "I once ate a mint at camp, caught a carp by hand, and did something shameful to myself behind the tent."  Well, that and "how do you know these are fake?"  Easy, there's a credit for screenplay.  There's nothing in this universe that will convince me somebody typed or wrote down what happens in this movie.  That could be used as evidence in court. 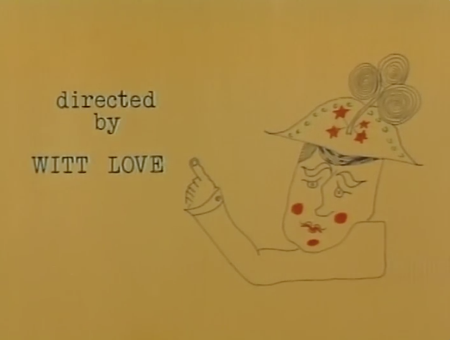 Those aren't rosy cheeks, those are a virulently form of VD.

Take this perusal of the opening credits as something like a disinfectant spray and body condom before we dive into the very rancid meat of this movie.  Again, remember, that music above plays the entire time.  And it's not the worst thing about this abomination!
Posted by Brian Barnes at 12:06 AM