Excitement, action, and random kitchen accidents await within the stunning conclusion to Love Goddesses of Blood Island!  Blood will flow, and that's just from listening to the awful low-budget guitar and kazoo-filled-with-whipped-cream jazz score. 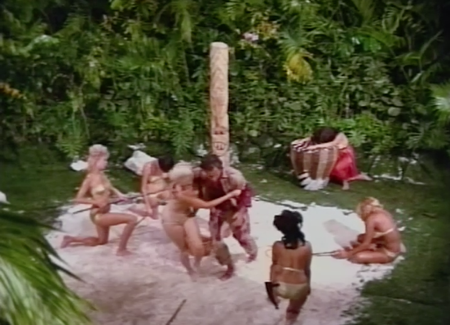 Our love goddesses have fallen into a trance, something the movie neither cares to explain or cares to shoot in any way that makes sense.  You have to give the director credit for trying this hard to actually not try.  It's a gift, or a curse.  Maybe it's a gurse?

Our hero and his new sweetie make a run from the beach.  But the love goddesses are close behind! 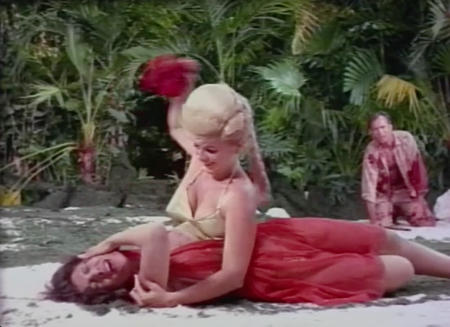 ... maybe a little too close!  Head love goddesses and Pippi Longstockings goddesses gets in a bit of a tussle that last nearly three minutes of light rolling around in the sand. In the 60s, this is the best you're going to get! Pippi picks up a rock -- that looks mysteriously like a sponge soaked in red paint -- but a rock damn it, a rock -- and proceeds to lightly brain the daylights out of the head love goddesses, and get paint on everything.

One down, but another approaches. Luckily our hero has a spear. 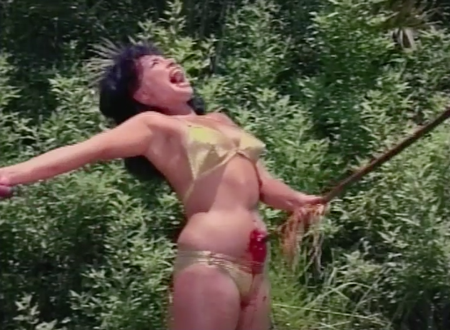 Somebody took corset training a little too seriously, didn't they?  Our love goddesses was carrying a large knife, and let's hope that she doesn't pull out the spear, turn around, get the knife pointed at her eye, and then fall on it.

What are the possibilities of that happening? 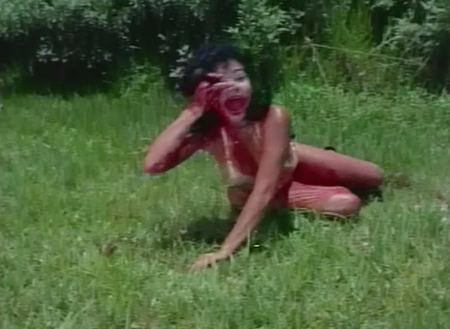 Worse yet, that grass is full of ticks!

Relatively high!  The other love goddesses never show up (big hair shellacking appointment?) and our hero and now tamed love goddesses (couldn't leave well enough alone without mentioning a fetish, could I?) get off the island.

I stopped the movie here and assumed they were eaten by very dull-toothed sharks. 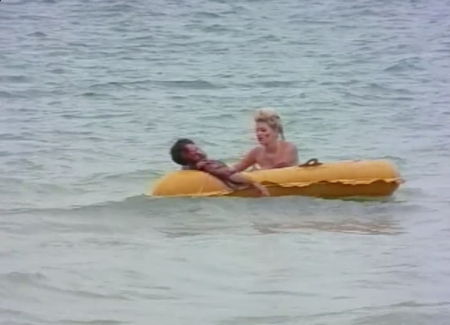 You'd tell me if my tongue went black, right?

Thus ends Love Goddesses of Blood Island.  The last minute of the film is a ambulance/newspaper montage that our hero has been rescued, and that men in the 60s -- both allured by and afraid of women's sexuality -- can go right back to being jerks.