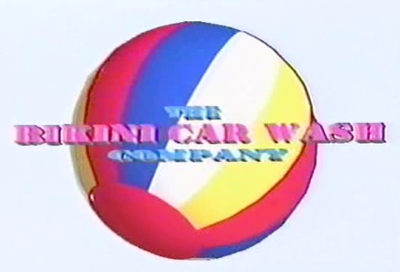 Who put plot in my dancing nude chick film?

This film is so good the sound track requires two LA hair metal bands.  This is necessary as 70% of the film is naked women dancing to music.  The other 30% of the movie is vile sewage.  It's as if somebody broke the main sewer line in hell.

Displaying 3 pairs of naked breasts within the first 2 and a half minutes, this production throws the entire bikini-related movie industry upside down.  Instead of padding the meager plot with boobs, this film pads boobs with the meager plot!  It even goes so far as to pad the boobs with butts!

The movie features our Iowa corn-breed hero Jack McGowen, or "Mr Fantasy Fullfilment", as he stumbled his way into babes and success.  Helping out are two muscle bound sub-Spicoli rejects (whose bodies spontaneously eject cartoon sound effects), and a bevy of boob and butt delivery machines.  Also, at 36 minutes in, female bad-ass-but-hot lawyer Bobby Kanova arrives -- signaling the start of 3 minutes of riveting legal banter, just what T&A audiences love! 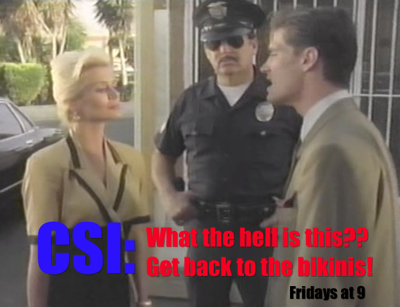 I set my watch waiting for her to suddenly become naked.  I was rewarded 26 minutes later. 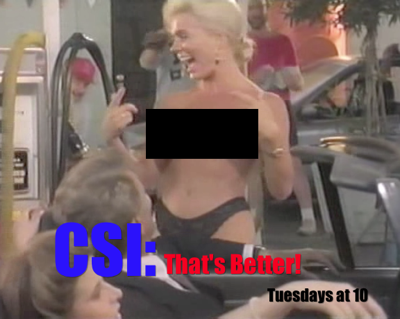 Just kidding, I don't wear a watch.  Better to not know how much time I spend watching this as the suicide prevention hot line has started blocking my number.

Rounding out the good guy cast are three strippers whose rest home clients don't like a dirty van.  I didn't make that up.  That's not a joke.  It's also not a joke in the movie, no matter how hard it tries to be.

One of the first lines you hear any of the women say in the film is "get away from me and my t***s".  I suspect this was not only in the script but something said an awful lot around the craft services table.

Lining up on the evil side is the crusading anti-fun DA, A.B. Quinn.  How did Ted Knight let this plum rule get away? Also there's an assistant DA, a Judge, and a cop named "Shag". 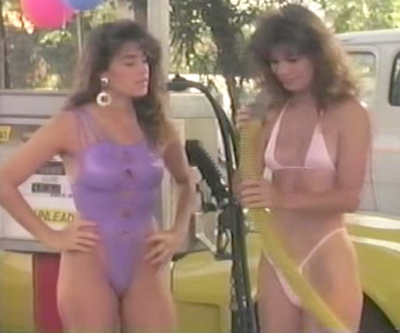 Two hot chicks in a T&A movie with a hose that sucks things in, gee, what could possible happen?

I should, at this point, mention the running side plot.  There's a flasher on the loose.  His identity is a secret.  Guess who he is?  Just guess.  I'll be here, driving a rusty corkscrew into my head to forget this movie while you think.  What's that?  You guessed the DA?  Amazing!  How did you know?

In between so many dancing scenes, this cliche of a plot unfolds.  Bikini girls help save car wash.  Anti-smut law and order descends.  They are either shammed as crazy perverts themselves, get wrangled in with sex, or discover that they've been repressed and open up.  Separating all this is hundreds of swish pans; the movie ends with an explanation of what a swish pan is.  It comes off as a joke, but I suspect early test audiences (two sleepy cats, a clothes pin, and a used coffee cup) questioned what that weird thing was between scenes so they added the "joke" at the end.

There are a couple bizarre things with this movie.  It seems to end 20 minutes before it does; there's endless montages, a weird surfing scene, more dancing filler, another coda, it just goes on and on.  I wasn't sure that I didn't die watching this and was suddenly discovering my eternal fate for a life of crime and murder.

Second, it starts with a very early 90s graphic intro of a bus driving through a tunnel and over a landscape with two hills.  Yes, you guessed it, please receive one cookie, split it in half, and then jam one piece into each of your eyes to protect yourself from ever watching this movie.

The third thing is the appearances of the flasher -- usually accompanied by a first person view -- but the flasher seems to be some sort of robot as he has terminator/robocop-like graphics in his field of sight.  Was this a jettisoned subplot?  There's a throw away line at the end to explain it, but that comes in the padding!  Even the explanations are padded! 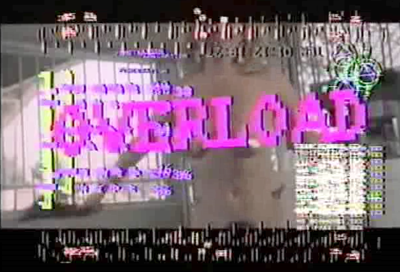 I don't have to cover anything up with this picture because the crappy graphics do it for me.  Hey, boobs are expensive!  There wasn't enough money left over, all they could afford was a TRS-80.

He's done in by the strippers -- but -- they never get completely nude (they wear pasties.)  So, in this movie, regular beach going bikini girls get nude at the drop of a hat (it seemed to be raining hats during the production), but actual strippers are too modest.

Now I know why the robot/flasher had a overload!

Representative joke:
"He [the flasher] hates girls, I think he's gay."
"That's nice, I think everybody should be happy, including flashers!"

What follows will either give you a deeper understanding of the depths of my OC, or just how sad my life has become.  The editing on the many naked dancing scenes was poor, with tops and bottoms appearing and disappearing.  It was really distracting, and I began to exclusively focus on that.  I'm beginning to think 80s/90s T&A movie producers didn't care a lot for the final product.