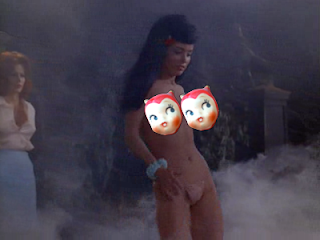 Black Ghoul: With the loss of her lover, this one cast herself into the volcano's fire!

The Black Ghoul positively spits out "this one", but why?  The stripper got a bigger trailer on the set (trailers?  Ed Wood movie?  Ha!)  Wood lifted both their sweaters and blamed the other?  Fight over a wig?

Later on, after flashing some stock footage of a rattler, suddenly, the entire dance is a different theme!  Criswell plays along, but I have some concerns (in red):

Criswell: She was?
I listened to this over and over, it makes no sense, but it seems to be what Criswell has to say.  Did Wood fall over drunk and smash a cue card?
Black Ghoul: As I said, a worshipper of snakes, of smoke, and flames!
What?  No you didn't!  Don't lie to me, evil minion of the dark!
Criswell: Oh yes, a religion of sorts!
Black Ghoul: It would seem so, master!
Yes, that's the definition of the word "worshipper."  Yeesh!

Criswell: She pleases me, permit her to live in the world of snakes!
Golly, thanks, Criswell.  I'm sure she'll appreciate that more than burning to death in lava!

This woman's name is Mickey Jines and she's probably the best dancer of the bunch, and well know in the vintage erotica.  For one of the damned, especially one that was burned alive in a volcano, she's all smiles.  I guess nobody asked for their motivation before rolling the cameras!

She's so pretty she makes the mummy crackle on and on about snakes.  I'd give Ed credit here for the possible double entendre, but I'll take it right away for making the werewolf some kind of mute growling idiot who responds to everything as if he's having a problem passing a kidney stone.

I'm sorry, she's very beautiful but I just can't get over that crappy mummy/werewolf comedy team!  I just want to punch them!  I apologize, Mickey, but you've been upstaged by crap.  Welcome to the world of Ed Wood!

She's got the moves.  She can transfer gracefully from Ed Wood screaming "Do a Hawaiian dance" to "Now you're a snake!  Ssss!  Ssss!  Be the snake!!!"

I could point out that the original costume looks more African than Hawaiian, and the flower in the hair wig and the fluffy bands kind of work, but it's all for naught as everything is just thrown out when the magic of stock footage abruptly changes the theme!

7 solid minutes of entertainment, rudely interrupted by stock footage, a mummy/werewolf comedy act that came in strong on the head banging and skimped on the comedy, and Criswell giving us some kind mini lecture about world religions.
Posted by Brian Barnes at 12:16 AM