If there's one woman any straight man my age would want to see naked, it's Marie Osmond!

No, wait, that's my own personal demon, I apologize.  Part of the restraining order that keeps me from coming within 50 miles of Las Vegas or Branson -- or owning an incredibly creepy doll -- also states I that shouldn't mention her name.

I also am legally obligated to never lose weight.

I meant this lovely creature: 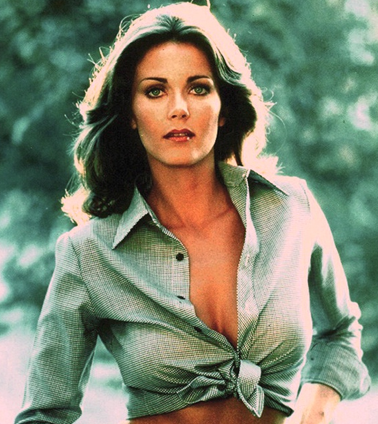 Screw you, Catherine Bach!  I rule the demolition derby!

Lynda Carter.  Here starts our long and twisting path in which we painfully try to pull hearsay and rumors together to create just enough words to create a post that has some slight relevance to the increasingly irrelevant Playboy month.  Why did I start this?

The desire to see her nude has sparked the continued rotation of this picture: 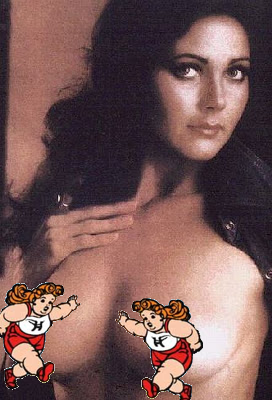 Etta Candy is not pleased by this turn of events.

The story of this picture goes like this: Carter was supposed to play the Playboy bunny Miss May in Apocalypse Now.  A typhoon destroyed the set, Lynda signed on to play Wonder Woman, and Colleen Camp got the part.  This picture is supposed to be from the production.

Also, according to rumor sourced from the very internet itself -- the wealth of all that is true and right -- Hefner has an entire set of photos locked up in a vault, along with the real gun that shot JFK, the Roswell aliens, and Hef's dignity and pride.

Carter herself says it's a cut-n-paste job.  Others think it's real.  Still others say "pretty lady!" and giggle a lot.  What do I think?  Who cares, because you don't need this picture to see her boobs.  You just need to rent Bobbie Jo and the Outlaw, or learn to google you noob. 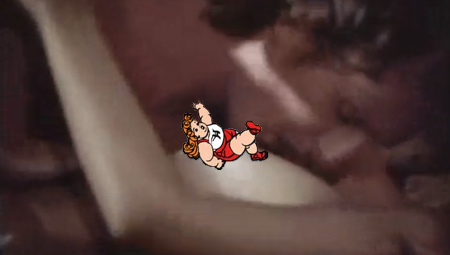 There you go.  Stop obsessing over a single picture.  I mean, there are other things in life ... well, not for me, legally, damn restraining order! 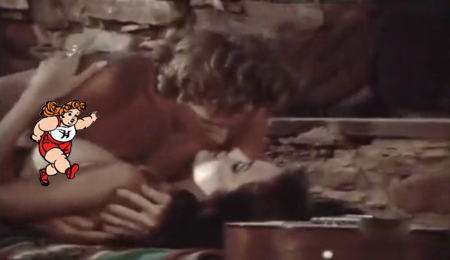 I don't think they are playing that guitar right.

Since Francis Ford Coppola is a supposedly big fan of this site (note that the word "supposedly" removes any penalty for myself being an outright liar) soon we will know the real answer.  Leave a comment, Mr. Coppola!

Side note to all the idiocy:  Yes, I knew who Etta Candy was before I embarked on this thing that slightly resembles a coherent post.  Among my many other redeeming features, I'm a comic book nerd.  No, no, ladies, line forms to the left!
Posted by Brian Barnes at 11:51 PM

Etta Candy? How dare you ruin my fatty with that fatty!