I regretted starting "Playboy Month" the moment I did it, and I regret it even more after sitting through this slimy pile of 80s movie tropes viscus.  Staring Playboy bunnies, a Thurston Howell III imitator, and the boom mic (or at least I hope that's what it is, it's long and meaty and appears at inopportune times), this Playboy production stretches the limits of comedy until it snaps back and permanently mars your face. 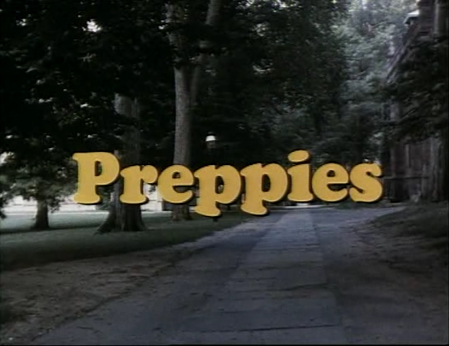 And here I thought I rented Pound Puppies: The Movie.

This T&A film is actually just a T film unless you think the A stands for asinine.  It's wall to wall boobs with nary a butt to be found.  I've watched enough of these to know this is original, and that's either an exciting development in my cognitive abilities or just an utterly sad footnote on the facts rumbling around in my head.

This film is actually a stunning treatise on class warfare, where the well-to-do are uptight, cold bitches and the down-on-their-luck are wild, fun party girls.  It's a modern existential film with strong undertones filled with many well developed characters and their boobs.  It's follows in the footsteps of Equus, just, you know, without the horse.

There, my existential philosophy class in college finally paid dividends! 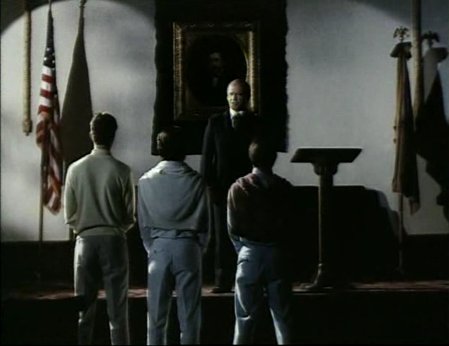 Professor Plot Exposition™ lays out the basic plot.  Our three heroes are failing college, which means they will lose control of the family fortune of really bad jokes and pratfalls.  One of them is doing an imitation of Thurston Howell III, and the others are actually attempting to act.

They are all wearing sweaters.  Preppies, everyone! 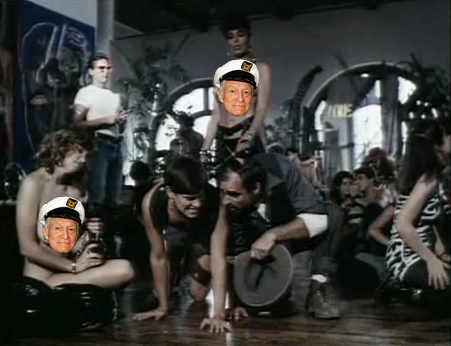 Hey, James Dean, get out of the shot!

Here's our villain, who the movie promptly forgets after this scene because, damn it, we emptied the Playboy mansion to shot this and nobody wants to see this guy chew scenery.  His evil plot is to ruin our heroes studying so they fail the final exam so he gets the family fortune of comical clacking teeth.

His accomplice is Senior Dirty Italian Groundskeeper™, in another brilliant win for racial diversity in movies.  I might have used the wrong word.  Racist and racial mean the same thing, right? 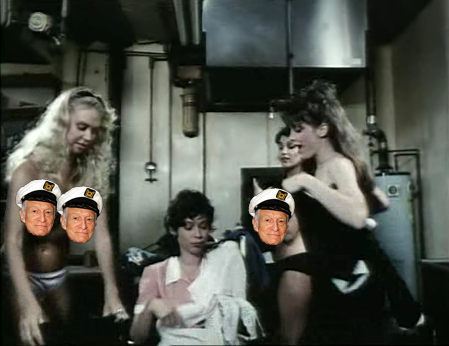 Here are the four hot chicks hired by the accomplice to distract our heroes by sexing them up.  One of them has her own subplot that counts for the "B" plot of this film.  B as in "boring" and "banal bile" and "bobo bites bananas!" 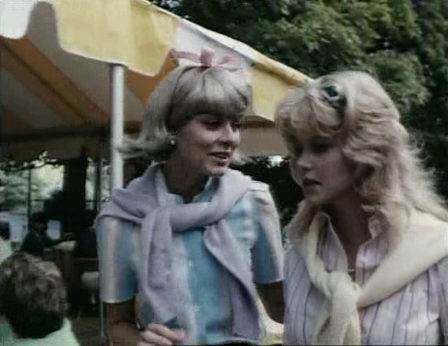 Proving that you can take platinum blonde a little overboard.

Enter our two frigid preppettes discussing the finer points of not putting out.  I think we are seeing our director's life being vividly played out on the screen, or he's just getting back at some woman in college, or there was a sale at Macy's on comical platinum hair spray.

The one of the left talks with a female imitiation of Thurston Howell III.  Did the other actor forget to call dibs? Does anybody care?  Do rich people really have soirees with $12 tent rentals? 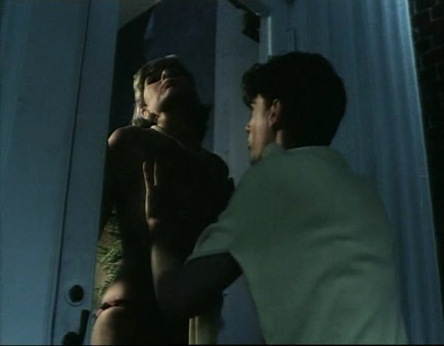 My local community theatre has really updated the mirror exercise!

One of the preppettes lets her boyfriend fondle her through plate glass.  What would that be, first base on a walk?

This also reminds me of my various summer camp experiences, just without the glass, and with a Teutonic counselor named Helga instead of a Playboy bunny.  OK, maybe not at all the same, but the shame seemed similar! 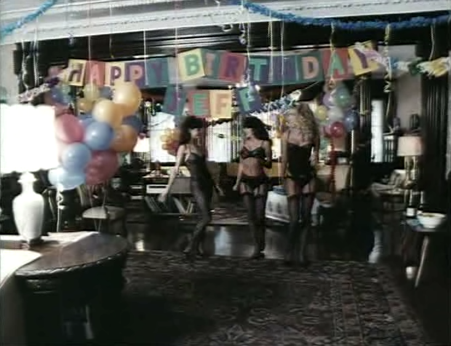 My brother's name is Jeff.  Jeff, the lucky bastard!

Our hot chicks throw a party.  This was not at all like my camp experience.  There was more crying. 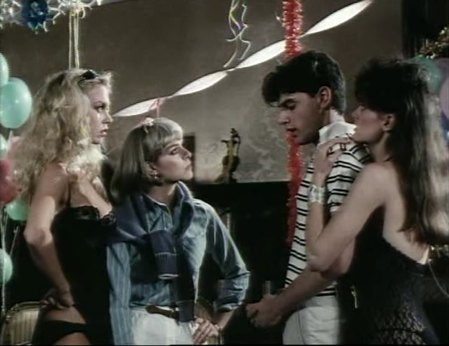 She's looking  very disapprovingly at the minuscule height he's achieved on that collar.

Our preppettes manage to chase them off, but our sad, lonely and pathetic guys ... actually, wait, that's me, the viewer.  Regardless, here's where the director earns his paycheck and actually blocks the boom mic for a good 30% of the scene, and also manages to crank up the symbolism.

Should sweater wearers stick together?  Does the lack of sweater on this preppy show he is moving over to the dark side of lingerie wearers?  Does the red tinsel hanging down represent a christmas tree just out of frame, hanging like the Sword of Damocles over this decision?

And, most importantly, could the set decorator find a more bland balloon color? 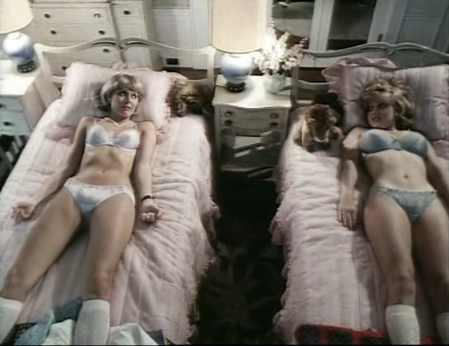 The hottest blood transfusion ever!

The preppettes decide they are going to have to learn to fake liking sex, so they practice while we are treated to what seems like incestual voyeurism, punctuated by pratfalls, broad physical humor, and an almost hanging.  A sure-fire comedy recipe!

Someone get the set designer a cookie!  They've made up for the pastel balloon debacle. 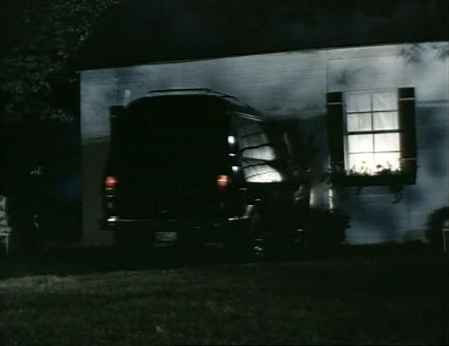 After this, Mr. T fired a million bullets and hit nothing but exploding flower pots.

Our ho-bags with hearts of slightly dented tin rescue our preppy heroes from a fate worse than death by playing lo-fi A-team in this movie's explosive action scene.  The director decided against CGI and went right with the rental van and the cardboard wall.

This scene signals the ramping up of the tension and a ramping down of naked chicks and the complete stopping of the VCR as most of the 16 year olds watching this finished already.

I managed an A-team and a masterbation reference in the same paragraph.  I'm not sure if that's good or bad. 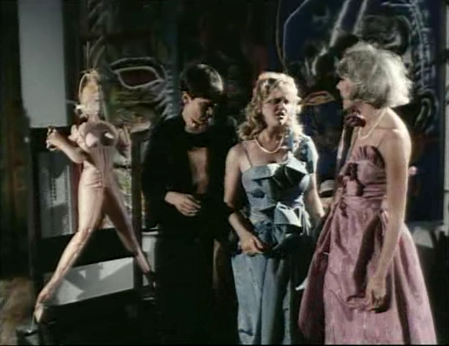 Wait, that's right, we had a villain!  And a plot!  Both the movie and I suddenly just remembered that.  The preppettes call him, he arrives with a gun, hijinxs that would have gotten rejected for an Hanna-Barbera cartoon happen (too expensive to animate, show Huckleberry walking again!), and the movie wraps up with the Preppies ace-ing their test and our expensive prostitutes falling in love.

Everyone makes out well in the end, accept people that might have come into contact with bodily fluids at the wrap party.
Posted by Brian Barnes at 10:40 PM