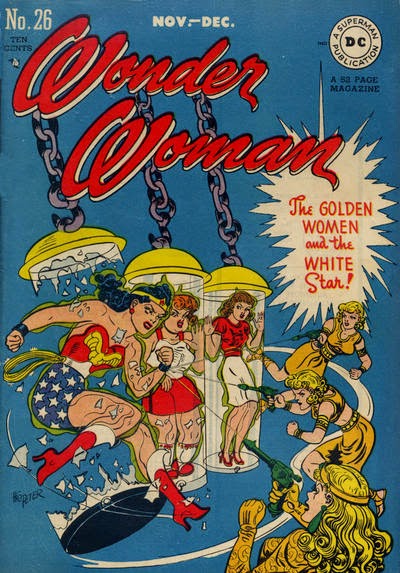 Do blondes have more fun?  I don't know, but you can be sure they are more sensible as they not only protected their collection of 1940s female cliches under glass, but were thoughtful enough to wrap them in radioactive full body condoms.

Our three blonde babes are also considerate enough to aim at the same place -- Wonder Woman's bullet proof bracelets.  I mean, surrounding her and shooting her in the back wouldn't be sporting, and would probably make a pretty disturbing image.  Golden Age Wonder Woman certainly ran the circuit of fetishes, but I don't think Faces of Death was one of them!

Note the motion lines at the bottom-right of the cover.  Try to figure out what in the hell the artist was going for, unless it is just a perverted ghost.

But, who are those two women with our amazon?  Why, they are one of the dumbest ideas for a side kicks ever, the Holliday Girls -- and I'm counting Sodium Boy and Water Man. 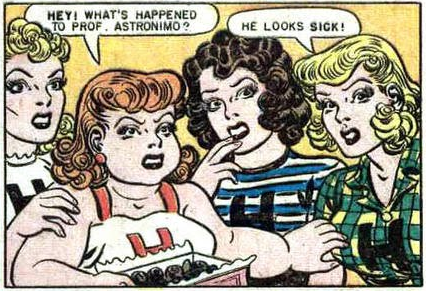 And the leader of the Holliday Girls?  Etta Candy.  Etta Candy.  She likes to eat candy.  Surprise!  She actually whips people (what, women whipping each other in a Wonder Woman comic?  Pshaw!) while demanding candy.  And she's ... rotund.  Ugh, 1940 comics.

Did they all shop at the same store for those eyelashes?

Another thanks for Pappy's for the second scan!
Posted by Brian Barnes at 6:37 PM

Email ThisBlogThis!Share to TwitterShare to FacebookShare to Pinterest
Labels: She's a Wonder