In 1963, nudie film makers David F. Friedman and Herschell Gordon Lewis, two guys we've talked about a lot of this site, had a brilliant idea that became the very first gore film, Blood Feast.  A single film, made in Miami Beach by an amateur director/contractor named Richard Fink, called Six She's and a He, aka The Love Goddesses of Blood Island, was the second gore film.  And nobody knew about it.  The prints were lost, until Something Weird Video managed to reconstruct a partial version of it from bits of negatives.

There's a lot of Manos: The Hands of Fate in this thing. 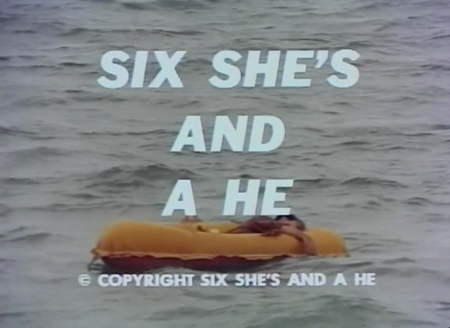 I think you're doing the copyright wrong.

Note to self:  If I decide to repackage an exploitation film to find a wider audience, I might want to think about adding new title card.  Even back then, in 19-six-she's-and-a-he.  I'm surprised they managed to get the "c" right in the middle of the copyright symbol, and not "g" or "u" or "blargh." 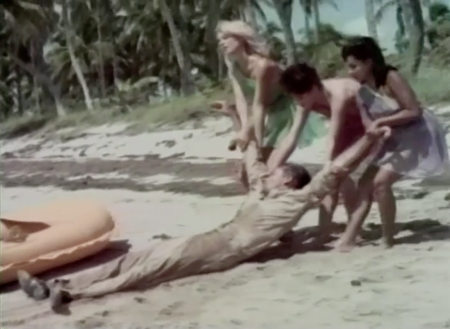 That jump suit is wet in very inappropriate places.

Our hero washes up on a beach (probably the only thing washed in this film) and is dragged off the beach by some pretty ladies, one of whom has a darling proto-Farrah Fawcett hair-do -- while stranded for years on an island -- a hair-do she must have put in place with coconut oil and snakes.

The women that drag our hero off the beach are called -- I kid you not -- Aphrodite, Eros, Pantora, and ... Rebecca. 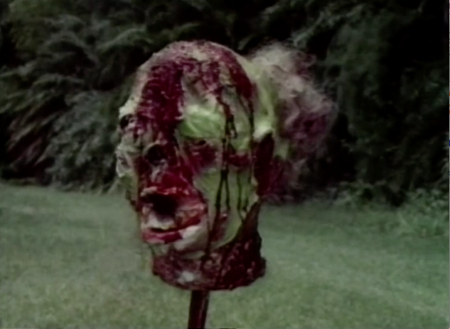 Fred gets his first taste of how men are treated on this island, and I assume it just confuses him because a comic book ad mask covered in red paint doesn't quickly translate to a set of rules and regulations. 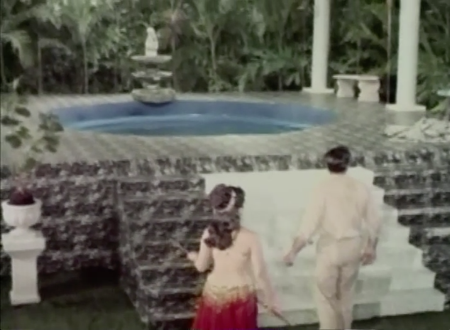 Ancient wonder or the pool at the local Motel 6?

Our sexy overlord is Aphrodite, who says numerous times that Fred will "intimately know the stick."  This is what she uses to keep men and certainly pesky cats in line.

Our hero notes that "no woman could have built this structure" right in front of a woman threatening to hit him with a stick for the crime of being a man.  Instead of a much deserved thrashing, she just agrees with him, and then notes he's going to be worked to death.

Somebody got in the last word! 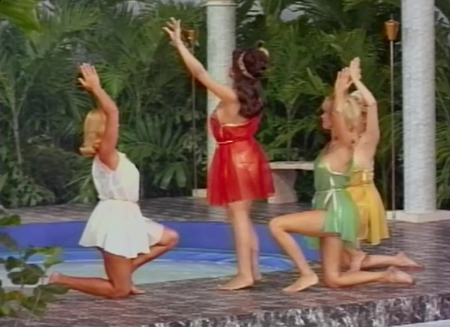 And what do these terrifying she-wolves do next?  Why, the first of many, many, sweet-Jesus-take-me-home-now dance numbers.  They are about as sexy as you'd assume, and that's without the thrashing stick.
Posted by Brian Barnes at 10:19 PM

I love films where women who have supposedly never seen a man still dress like sex kittens. Great fantasy! I should know, I had that same fantasy many times.