We interrupt the normal idiocy of this blog for a whole different type of idiocy, namely, my midlife crisis.  I am now the proud owner of a repop (reproduction) Stretch Monster.

He is, without a doubt, in the category of red-sryup filled monsters, the coolest thing ever.  I know you will agree this is a proper cure for a midlife crisis, or, if you have no soul, agree that I should have gone with the boat and the 20 year old bikini model instead. 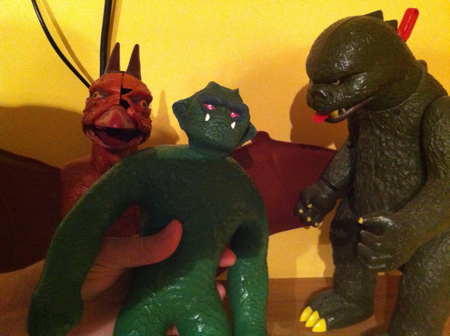 Here Stretch Monster hangs out with some fellow monsters.  Look at that smug grin, he knows he can take them, but he doesn't have to prove it.

He's wondering if he should point out that spot on Rodan's nose, but he's thinking that Rodan probably already knows. 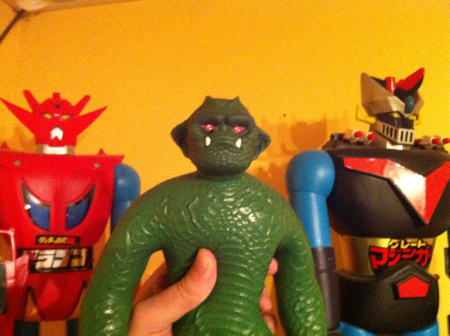 Here's Stretch Monster with some Shogun Warriors.  Again, see the confidence of a monster that's filled with syrup that has the consistency of snotty oatmeal.  He knows, regardless of how many missiles or battle axes the Shogun Warriors have, he can take them.

Though he might have to lay down afterwards -- and as he's filled with syrup -- that means his butt will get flat.

He'd rather avoid that. 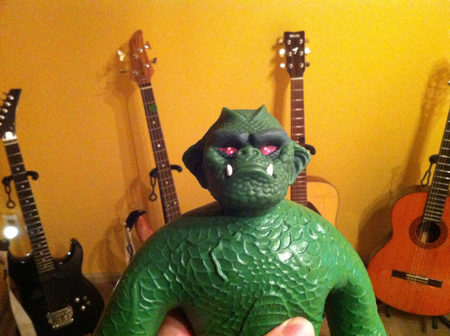 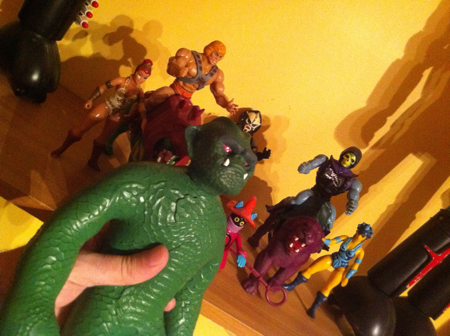 Finally, Stretch Monster hangs out with some heroes and villains of Eternia.  Why aren't they fighting?  Because Stretch Monster brought peace to the He-man universe by his sheer will.  He tried to broker a peace with the single term of "everybody gang piles on Orko" but even Hordak wasn't going to go for that.  Stretch Monster might just take it out on Orko, anyway.  That's how Stretch Monster rolls.

Now he goes back in his styrofoam coffin so he doesn't deform.  This is how middle-aged people play with toys.

Site News: I put up a followers blog, if you one of my followers, give it a click and join up!
Posted by Brian Barnes at 4:55 PM