Written by Ed Wood.  He also held the cue cards.  A rare multi-talent, that guy! 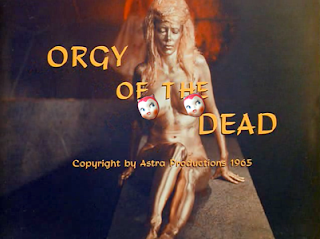 We're going to do this one a bit different.  As this film is basically an excuse to show a number of stripper acts within a spooky graveyard -- i.e., a badly dressed set full of either fog or the smoke from the camera man's ears -- we're going to separately discuss each stripper.

Our story involves a couple that crashes their car and ends up in some nightmare realm ruled over by the Emperor of the Night, played by Ed Wood's pal Criswell.  A very, very drunk Criswell. 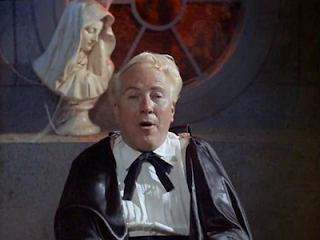 Ed!  The craft cart is out of scotch again!  I can't work in these conditions!

I guess they were on a tight shooting schedule as nobody wanted to give Criswell time to dry out.  It's easy to see the future when one is drunk -- the future is face down on cold tile in a pile of your own puke!

Still, this was a good decision as Criswell slurring through this line:


"It will please me very much to see the slave girl with her tortures!"

... is the best thing ever.  This is next followed by a scene where a man whips a stripper with a fake cloth cat-of-nine-tails very softly.  She reacts with a pathetic moan an average of about 2 seconds after being hit.  Obviously, Criswell's booze-induced time dilation allows him to miss this, because he seems pleased and bellows:

I missed the torture, but more power to Criswell.  Luckily, she wasn't tortured so bad as she couldn't go into her strip act.  That's real dedication to craft!

Joining Criswell is the Black Ghoul, originally written for Vampira, but even at this point in her career --- where the forces of "decency" were doing everything they could to destroy her -- she knew a lot better then to appear in this celluloid maw of catastrophe.  This part is instead played by Fawn Silver in a ridiculous wig in a film full of ridiculous wigs.  I know this is supposed to be an unearthly realm, but there is red and blonde hair colors that I believe only came into existence when they created multi-colored peeps.

The Black Ghoul has a hard time staying in character when next to Criswell, almost as hard as Criswell has staying on queue. 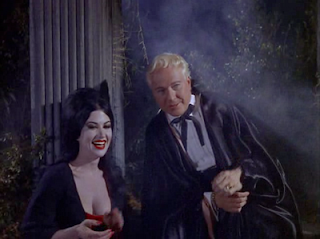 Fawn Silver only seems to be in 3 other movies, one of which Haunted Closet reviewed: Terror In the Jungle.  Who would have thought being in an Ed Wood movie would cut your career short?

Next up are our victims, no, not the audience, but these morons: 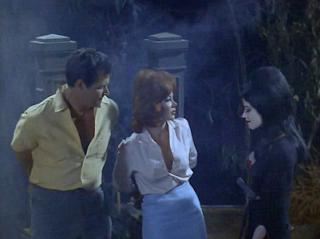 Notice everybody is staring directly at the red head's rack, yet nobody notices the obvious wig made from cartoon fox hair.  These victims literally do nothing for the entire film, and are saved by Criswell either not having a watch or to drunk to see the hands, and the Black Ghoul's frankly terrible time management skills.  If Criswell says hurry, it doesn't mean dancing with the knife.  It means using the knife!

It's interesting to note that the woman victim is also one of the strippers (as a completely separate character), in a blonde wig made from dried, day-glo painted spaghetti. 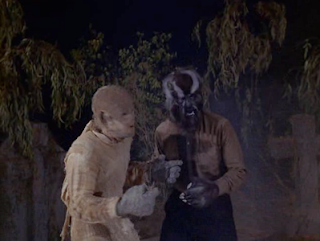 The separate reviews below: