A Nice Pair: The Adventures of Lucky Pierre, Part 7


This broken toy of a film winds down to a screeching halt with it's final cornucopia of boobs and butts, and only minor interruptions from the pug-faced, human-form playdough Billy Falbo.

You will notice the film switches from B&W to color in this segment.  The reason is contained in what seems like a fourth-wall joke, but is more likely that Lewis ran out of color film, or more likely, Falbo's presence drained the very color from reality.


Picnic at the Playground 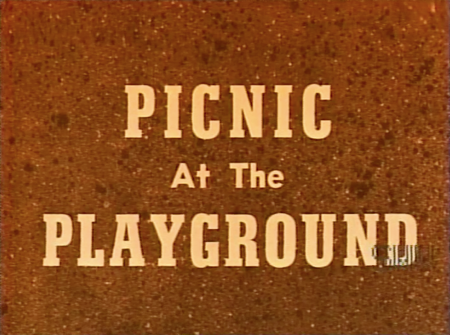 In this segment, there's no picnic.  There's no food.  There is a playground (most old drive-ins had playgrounds attached,) and there's a severe lack of clothes.  It stars the same three women from the segment before, so you're in for the same half-assed jokes as before. 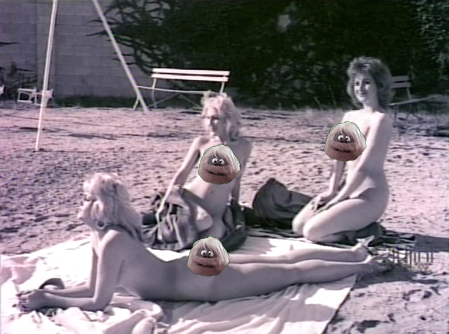 Hey Boo-Boo, I'm suddenly not interested in the pic-a-nic baskets!

Our three hot chicks are spending a day, not at all, in any way, having a picnic.  They are about to play in the sand and on various rickety playground equipment -- in high heels -- in a Lewis movie which means there's no health insurance and the catering is done by two gin-soaked winos who robbed a donut shop last night.

So, with no further ado: 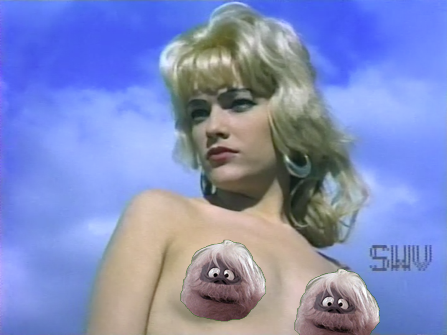 Angry at something, just not sure what ...

This be-wigged siren is still trying to master the sexy face, but if you'll accept a sub-par pout, then this is the lady for you! 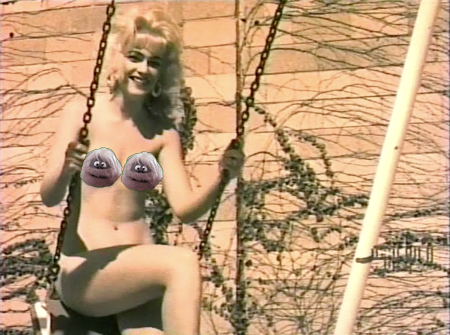 Wheeeeeee!  My wig serves as a majestic wing!

She's a real swinger!  Oh I'm sorry I'm truly sorry I've done seven of these and I'm not feeling well, I've been dizzy and I'm not eating much and everything I touch feels sticky and I think I've lost vision in my left eye ... please forgive me oh I no longer know right from pun wrong. 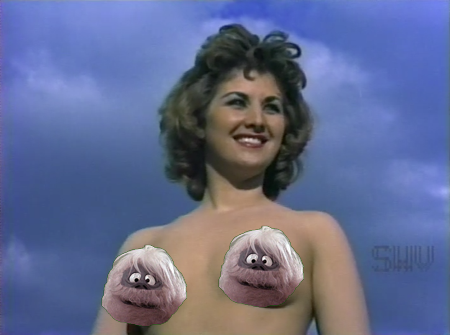 She's very enthusiastically happy.   Won't be when she sees the completed movie.

Look at that poise!  Look at that winning smile!  This is the look of someone that was told that this part would lead to fame and fortune and not being pawed by a shaven ape named Falbo. 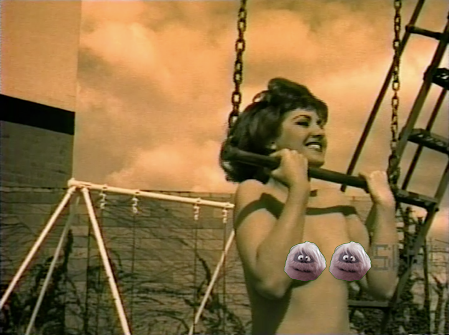 I think I ruptured my spleen!

There's nothing this fit woman enjoys more than a healthy round of calisthenics, she's ... also ... a real ... swinger.  Look, I'm sorry again.  I've turned to drugs to deal with the pain of this movie, I've even started mainlining lighter fluid using a penis pump.  Everything has been getting dark and I don't think I'll ever see anything resembling the tiniest shred of hope ever again.

Too dark, right?  That's alright, I can jump from light to dark -- just like the lighting in this segment!  Hey, Lewis, how about you do something more than the minimal amount of work required to make a movie? 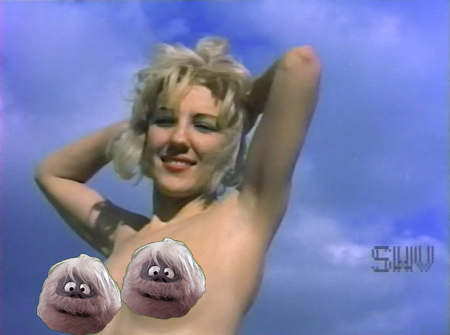 Here we have a lady who's not afraid to show her underarms, to you, to the world, to Lewis, to Falbo, and especially not Bumble who's pretty damn happy this is about over.

Also: This woman is an innovator.  She's already discovered and perfected the Facebook profile picture weight-reducing pose, in 1961. 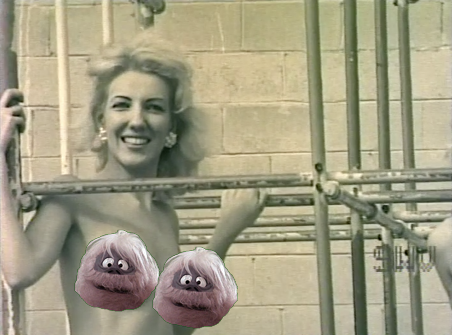 By the way, she's doing this in heels.  Not so high and mighty now, are you?

Think I'm going to make the same joke here, don't you?  You can't swing on monkey bars, why, swinging and monkeys, there's absolutely no connection.

That said, this hot chick can really bracheate. 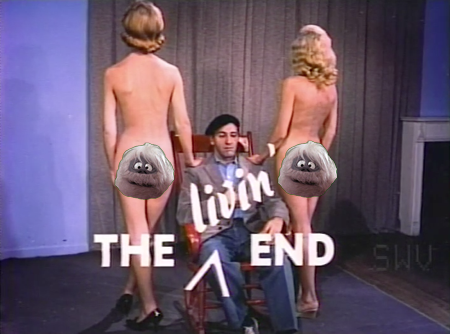 Falbo looks dead, which makes this a happy ending!

And now we come to the end of our exhaustive review of the major themes, character arcs, wigs, and boobs of The Adventures of Lucky Pierre.

Somebody was lucky.  It wasn't us.
Posted by Brian Barnes at 9:57 PM