A Nice Pair: The Adventures of Lucky Pierre, Part 3

You know how I go on and on about the kneecap incidents?  Well, (1) I learned it on wikipedia, which is never, ever, never wrong, and (2) I don't have much else to go on other than Falbo's rubber faced spaz routine.  So kneecap violence it is! 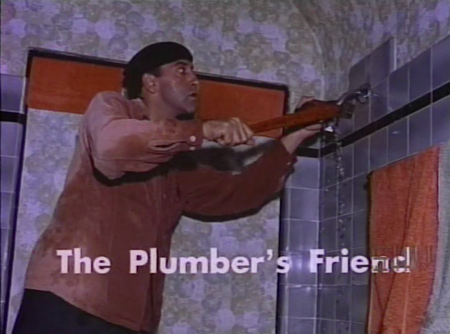 So they wallpapered the curtains?

Billy Falbo plays a wacky plumber, which is not at all similar to his wacky artist, or the wacky bird watcher in the next segments.  It is slightly different from his award winning portrayal of McMurphy in the London stage production of One Flew Over the Cuckoo's Nest.

Just kidding, just making sure you are paying attention instead of flipping ahead to see the naked lady.  It was, in fact, the stage production of Pratfalls and Seltzer, My Life as a Doofus, in East Peoria. 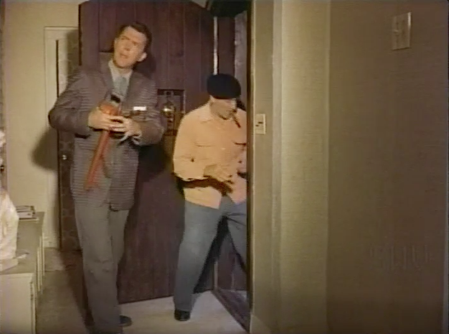 Audiences were pleasantly surprised by a nude Ward Cleaver.

Rounding out the cast is a late 50s wallpaper style called "off-green barf flowers."  Falbo barely manages to out-act it. 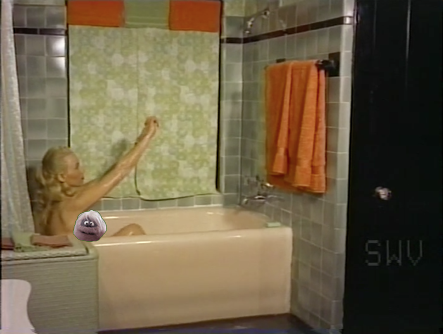 I count nine towels.  Note: The actual towel she will use is not among them.

The general joke is that Falbo's plumber goes about his work without noticing that there's a nude woman, and even has her hand him tools at one point.

She goes about her business pretending to wash herself, and Falbo goes about his business being a hammy jack-ass.

They all manage to ignore the wallpaper and hand towel drapes, which I understand was either quite the rage in the 60s or the home owner didn't want his good curtains to get Falbo flop sweat on them.  Probably a wise choice. 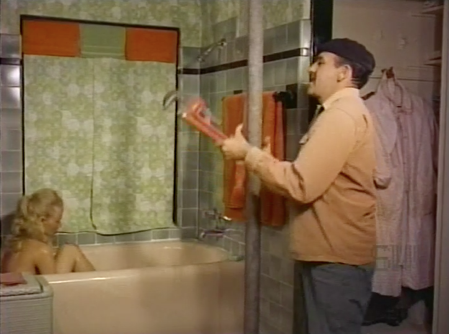 I bet this pipe could break a whole lot of knee caps!

This is the major problem with this segment.  Who do we look at?  The woman or Falbo, or as I like to say, the chick or the plucked chicken? 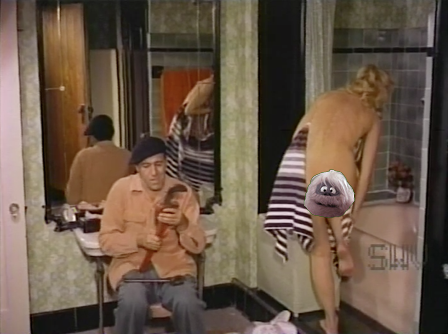 I'm actually impressed you can't see the crew in the mirror.
Even multi-million dollar pictures screw that up.

Right here we see the genesis of every letter ever written into Penthouse.

By the way, Lewis, where did that towel come from?  Is it too much to ask for some continuity in my nude woman flick?  You matched the drapes to the wallpaper, it seems like this isn't something you'd overlook! 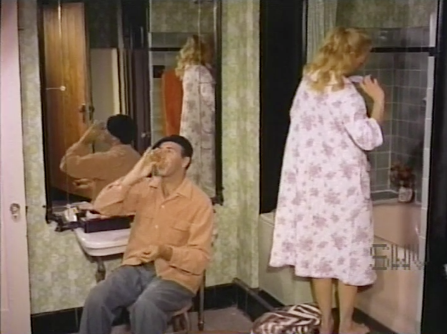 A faithful recreation of the drinking that proceeded the shooting off of his own kneecap.

Falbo, still oblivious to the woman, puts some of the perfume he finds under his arms (which happens to a so-bizarre-it's-amusing wood block sound), and then drinks directly from the bottle.

This level of comedy stage craft can only mean the big reveal is coming ... 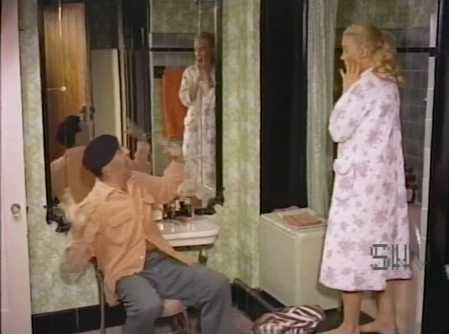 I want to point out Falbo's stomach in this.  There, can't un-see it, can you?  Go away from the computer, visit another site, research the life of Falbo, then come back.  It's still there.

It is now that I choose to point out the very prominent outline in the middle of his pants. 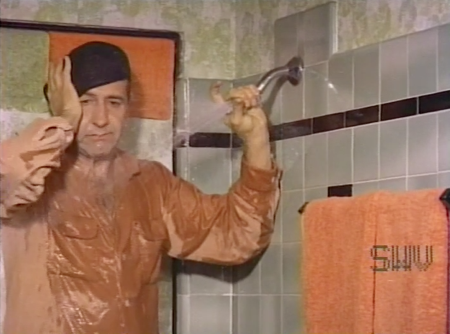 It ends with Falbo getting a cold shower and everybody else feeling damp and depressed.  The only winner in this segment was the ghastly wallpaper, who's unholy puke flowers will never die.