A Nice Pair: The Adventures of Lucky Pierre, Part 1

Today this blog embarks on an exhaustive examination of The Adventures of Lucky Pierre.  Merry !$%!^@! Christmas. 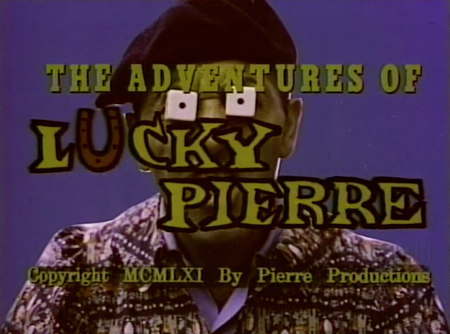 That jacket looks like a cross section of a dissected squirrel

Lucky Pierre was created by exploitation pioneers David Friedman and Herschell Gordon Lewis -- think of them as sort of the Lewis and Clark of cinema if Sacagawea had a nice rack and was covered with pig intestines.

Also assisting on the drawing of the title cards was a five-year-old girl with a set of fruit-scented markers.

This was the first film to include color, nudes, and what I've heard described as "comedy."  There is a comedian, a 8th level smudgy photocopy of Jerry Lewis, Benny Hill, and a mange-ridden jackrabbit on a 5 hour energy shot bender.  His name is Billy Falbo, and there's not a lot of information on the web about him except that he had a habit of shooting people in the knee.  Twice.  Once his own, once a hunting companion.

It's almost enough to make you believe in higher powers; it seems he was kneecapped by a god for all the mugging he does in this film.

I want to warn you that the music in this movie sounds like a cheap keyboard's mambo setting, if filtered through a slightly out-of-tune flute and an exploding piano. 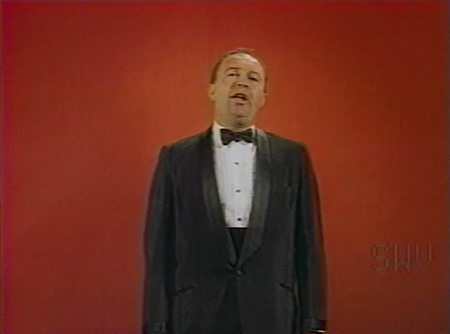 The movie starts out with an announcer who basically jokes about how cheap the film is.  As if the red background and ill fitting suit didn't give that away.  He's hauled away as if he is crazy, and while I can't say for sure this actor was, looking over his later roles, his agent certainly was.

This actors name is Lawrence Aberwood, and he started in Scum of the Earth, another Lewis movie.  Like a lot of early exploitation cinema, it got away with nudity by pretending to preach against the very thing it was.  Lawrence has one of the best all time speeches in this one, and practically spits it out.  In lieu of real content of actual humor, I print it in full:


It's time for straight talk, Kim. It's not my fault you posed for Harmon. It's not my fault you posed for Larry in the nude. You did it, its your problem, its pretty late to act prissy and prim. All you kids make me sick! You act like little Miss Muffet and down inside you're dirty, do you hear me? Dirty! You're greedy and self centered and think you can get away with anything. You're no better than the girl who sells herself to a man, you're worse because you're a hypocrite. And now little Miss Muffet is in trouble and she's all outraged virtue. Well you listen and you listen well, you're damaged merchandise and this is a fire sale. You walk outta here and your reputation won't be worth fifteen cents. You'll do as I tell you! Do you hear me? You'll do as I tell you!

Try using "you're damaged merchandise and this is a file sale" in your next argument at work.  I guarantee you a win!

This movie is split into a number of excuses to show naked women stories, and we'll hit each one in a new post.  Lucky you! 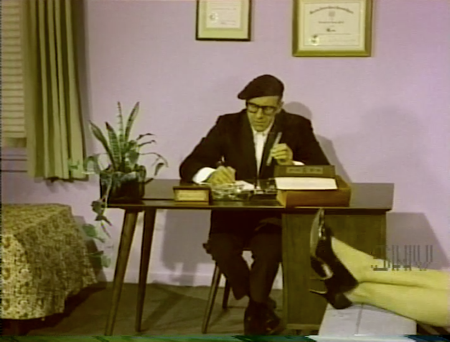 The woman is complaining that everybody keeps staring at her.  She talks, the doctor talks, and it grinds on for over a minute.  Golly, the suspense!  What will happen?  What could possibly be the joke in a movie that's all about naked chicks?  What could possibly make people stare at the woman?

Does she have an extra arm jutting out of her forehead?  A pet monkey that lives in an empty eye socket?  Is she a conjoined twin but one of the twins is a gleaming silver robot? 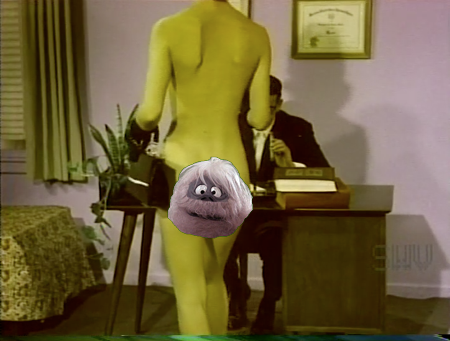 Bumble doesn't seem to happy about this

No, it's just the worse case of jaundice we've ever seen!  No wonder people are staring!

Look, Herschell, if you're going to shot the first nudie movie in color, try to make it the right color.