The Naked Ape: The Beast That Killed Women, Part 1

Do you like guys in ill fitting ape suits?  Do you like naked chicks?  Were you always rooting for Mario to fail and Donkey Kong to ... er, "get" ... Pauline?  Do you wish for all these together?  Have you drawn pictures of these scenarios in crayons?  If so, please seek professional help, hopefully the kind that can get you into a nice, comfy straight jacket.

For those of you that are still around, it's another exhaustive movie review, this time of the nudist camp/monster mash up, The Beast that Killed Women. 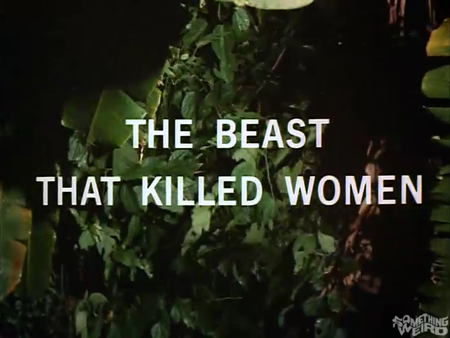 The same beast that soiled the rug.

Directed by shlock master Barry Mahon and full of a cast of people who seem absolutely stunned by the concept of acting, The Beast That Killed Women is the heartwarming story of a beast that menaces a couple of nudist, along with hours upon hours of nudist camp footage where the men keep their shorts on and the women are way to pretty to be actual nudists (a blanket statement that is sure to generate hate mail, but luckily nobody reads my babbling so I'm pretty well protected.)

But before we get to the good stuff (boobs) we have to get to the bad stuff (plot), or what passes for a plot in these parts. 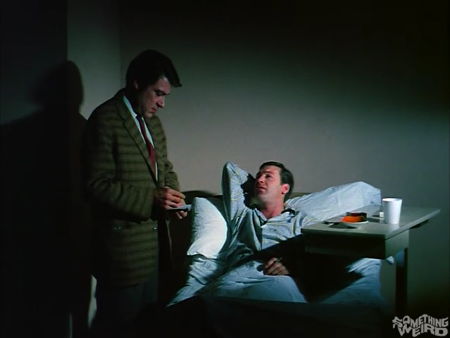 The good old days when you could smoke in your barren set hospital room.

Yes, the movie uses the flashback device.  It seems something horrible has happened to our hero, and it's not having to stare at the cop's green and brown hypno-jacket.  Something so horrible that they had to isolate his hospital bed in a badly lit limbo.

He goes on to explain how he and his wife are nudist.  Hey, Barry, show, don't tell. 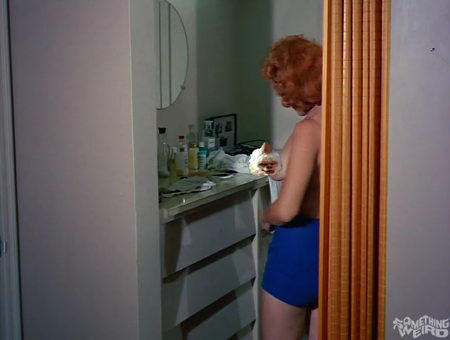 Add a little white and she'll be patriotic!

I'm really confused by 60s shorts.  How is it possible to make tight shorts so utterly unappealing?  It's as if the 60's short producing technology was lost in the 70s, sucked into a giant vortex of crap with all the gold chains and hairy chests.  The shorts in the 60s seem to defy all logic of fashion and sexiness.  As if they were designed by vengeful blind eunuchs. 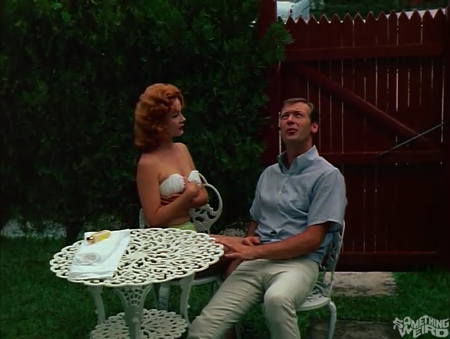 Somebody is either over-dressed or under-dressed.

The woman is our hero's wife, and no, the central mystery of the movie isn't how a bland guy in extremely tight white pants (check if it's labor day!) gets a woman like that, but it should be, because the ape costume is really, really awful.

She suggested they should go to the nudist colony.  He looks up at the almost pitch black sky and says "sure, looks like a beautiful day."  Remember, shooting schedules are the law! 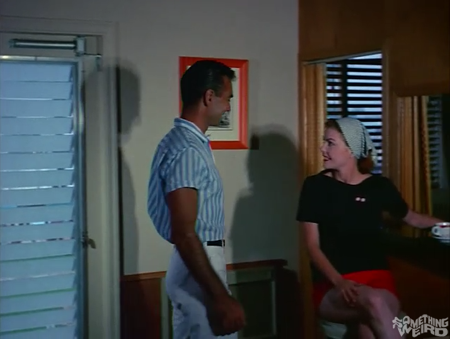 We suddenly switch gears to another bland guy and another hot woman -- pretty much a horizontal movement in my book.  The guy has an accent that sounds like rusty ball bearings banging around in a dryer.  She gets a call from our first couple, and everybody decides to go the nudist camp and be extremely bland there.

Will the next post feature more nudity?  Will there be an ape?  Will we solve the mystery of the shorts, or at least ritually burn them so they may never be recreated in the future?  Probably.  Will there be a strange Gilligan's Island vibe?  Certainly.