The Naked Ape: The Beast That Killed Women, Part 3 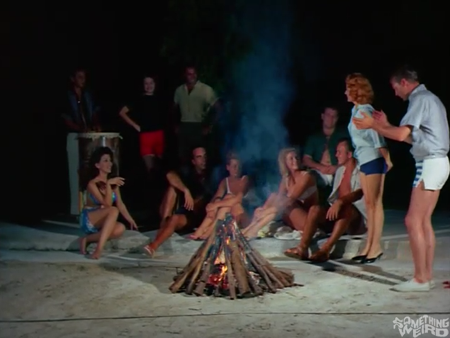 It's not a 60s nudie cutie feature if there's isn't one woman with high heels at the beach.

"Sure I'll be in your movie, if I get a featured dance!"

Here we get an extended dance number by the fire and clearly lit by a giant lamp behind the camera.  It's as if the director didn't care a wit about nearly anything except endless phone/boob scenes.

This, though, gives us a background for which the beast can finally make his appearance.  Grid your loins, here he comes: 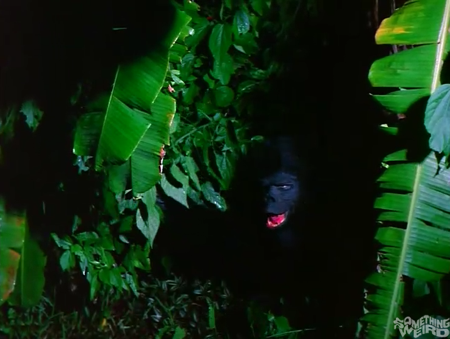 Beast no like plastic foliage!  Remind beast of Pier 1!

Let's give the crew a break -- the whole budget was used up on sun tan lotion and penicillin -- there really wasn't a lot left over for the ape costume. 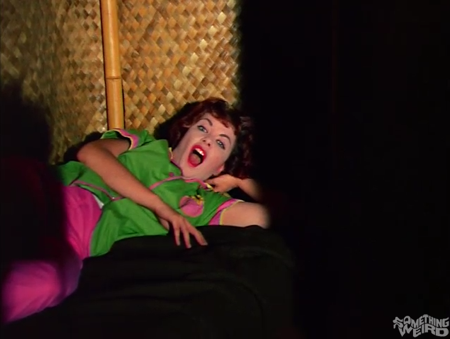 The beast found my blow-up woman with bonus mouth orifice!

This woman screams as at first sight of the beast, or after she's read another page of the script, or after she's seen her wardrobe for the day.  This beautifully awful, neon-colored smock looks less like something a sexy nudist would wear and more like an outfit for a grade school production of Peter Pan.

The Christmas ornament on her left breast is a nice touch.  Merry Christmas!  Here's you children's construction paper shirt!

The beast grabs our hot mess and carries her off to her eventually fate.  Hopefully the mortician has a better fashion sense. 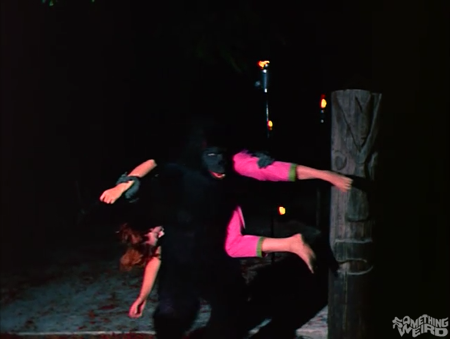 One strange thing: the ape noises sound exactly like how an 8 year old might imitate an elephant.  It shows some guts on the part of the director to not go for the obvious sound effect, and instead go to the wildly inaccurate and wholly idiotic sound effect.

Our woman makes a break for it, only to be tracked down by our beast and in a howl of random animal noises, not a single one gorilla related, kills her dead.  The purple pants, sadly, live on.  They can not die, for they have never really lived. 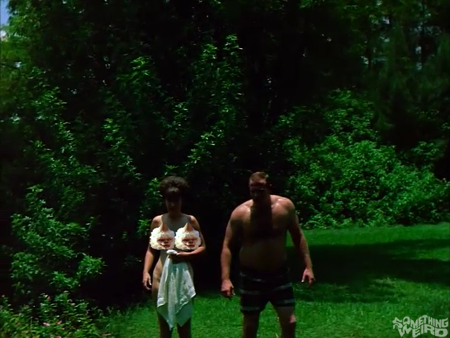 In the morning a couple nudist stumble over our first victim, right after they had stumbled over a box of donuts and a complete meal at Uncle Bob's Cake Emporium and Bacon Buffet (open on Sunday).  The man runs, the woman screams, and I'm pretty worried that we are a third into this movie and the director ran out of pretty people.

At least we have the beast!  Oh mighty beast, killer of female nudist, please rain your bounty down upon us!  Or, just fade back into the background so we can have another 20 minutes of nude footage.  Whatever you feel like.  Up to you and your ill fitting ape costume!