As the devil is wont, let's play another mind game.  Imagine that you're a European melodic metal band with fantasy overtones.  You name your band Grim Reaper and every third song you release has the word "hell" in the title.  You need to create a video for a song called Rock You to Hell, which is mysteriously not about hell, trolls, warlocks, or if Aqua Net is better than industrial strength wood lacquer.  What will be the imagery in your video?  If you said "chicks in prison where the janitor is a dollar-store version of the Toxic Avenger," then congratulations, you're a dope.


Grim Reaper
Rock You To Hell

A Bad Way to Start Your Video 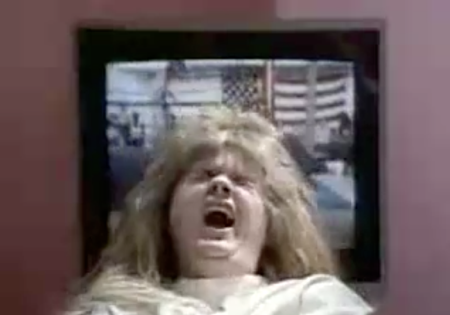 There's a lot of sex and fantasy in metal videos, so it's best not to start your video with an image like this -- your singer twisting his face into his best impression of a very sick cat attempting to dislodge a tuna-infused hairball.

Also bad: looking all the world like what Ozzy Osbourne's corpse would look like if it was bloated up with alcoholic eels.

Why Prison Doesn't Seem So Bad 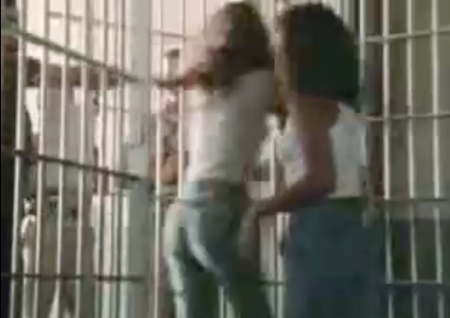 They let you keep the mom jeans and nobody takes away the hair spray.  A couple bitches got cut when somebody sharpened the end of their brush, but that's what happens in Glamour Prison™. 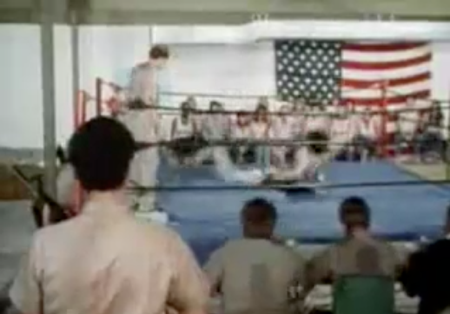 The video has shots of the band, shots of the prison, some weird grenade segue, a couple quick cuts of this wrestling, ladies in t-shirts, the singer in a straight jacket, some woman in high heels, etc, etc, ad nauseam.

It's like somebody in the band went to Art College, took Art 101, and majored in Art for Art's Sake, and who's professor was named Art McArty.  There's so much going on and very little tying it together save for lots and lots of hair.

I think that to the band this meant something; it resonated with the lyrics, it conveyed a story, and it brought a visual flair to the music.  On the other hand, the band named themselves Grim Reaper, so somebody probably just suggested this after getting baked while watching Caged Heat. 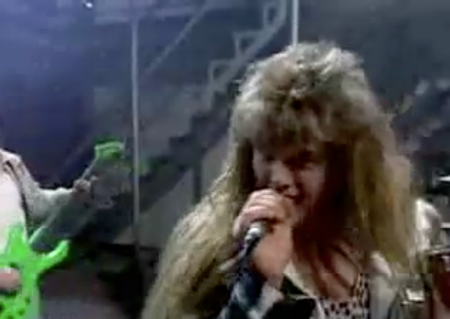 So that's what Cousin It looks like when you part his hair!

Hey, bass guy.  We sent around a memo before the shoot.  We're Grim Friggin' Reaper.  We all wear black.  We are filming in a gray prison.  We want to bring out the dirty, grimy, and dark feel of this song.  We had one request:

And then he shows up with it.  And he wonders why he's always the guy that has to fetch the donuts during rehearsal.

The Required Great Pair of Legs 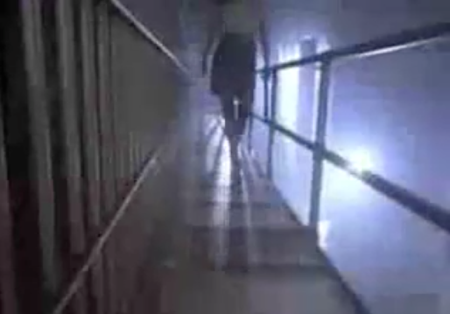 After the great ZZ Top debacle of '82, in which a couple metal bands found that they shared groupies with ZZ Top when they discovered long bear hair getting tangled into their big hair, an agreement was reached where ZZ Top would give a list of groupies to avoid, and for that information, the metal bands would always include a woman with nice legs walking down a corridor.

This agreement lasted until the You were with Coverdale???? debacle of the late 80s. 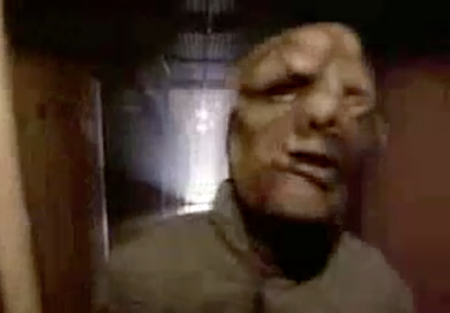 What happened to anybody sharing a Coverdale groupie.

Lastly in our spin-the-wheel random image rodeo, it's a very Toxic Avenger like creature, who is also a janitor, and plays no other part in the festivities.  It could be a nod to Trauma Studios, it could be just a rip-off, or it could carry some deep, personal meaning wrapped in a terrific metaphor.

Than again, Grim Reaper: Rock You To Hell.

So probably not.
Posted by Brian Barnes at 12:27 AM