Welcome to another spelling-challenged edition of Metal Mania! 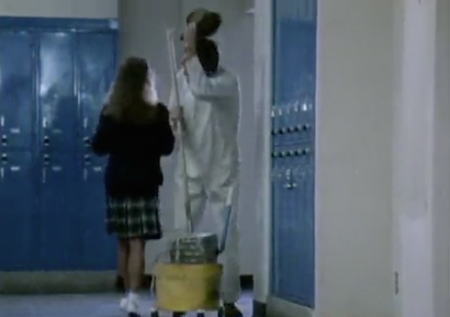 I will have her panties for the janitorial closet.  Oh yes I will.

I've seen a lot of metal video, but I've never seen one so full of cliches that I'm not sure that it's not some elaborate joke.  I actually think Steel Panther lifted this for their Death to All Butt Metal video!

We start out in one of the many all sexy girls schools (see, you can spell it correctly if you just try!) that filled our country from 1983-1990 until the all flannel Seattle schools took over.  It's full of creepy janitors, the always necessary uptight foil, and unisex big hair and frilly clothes.

Again, what the hell reality?  I went to high school in 85!  Why wasn't mine like this!  Well, with less Britny Fox, that is. 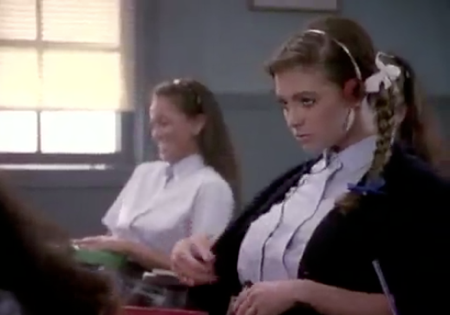 Sadly, she spent her college tuition on those implants.

I hope that's the way she's sitting or her boobs make up 82% of her mass.

Here's our rebellious girls, named Susn and Mry and Sandr (I've typed Brtny twice and I'm already sick of it) who are listening to ... sigh ... Britny Fox.  In steps our moral authority who is trying to get the kids to listen to Bach and keep them from listening to the tunes of Britny Fox, who's band members are, ironically, probably older than most school teachers.

At least they aren't as old as that Bach guy. 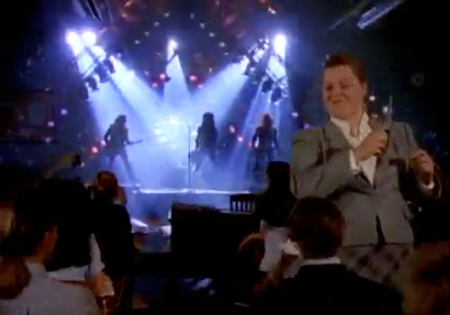 In comes Britny damn-it-I-have-to-type-it again Fox to bring the music to the highly oppressed actress/strippers hired from the local TaTa Tango strip club.  Our teacher is surprised to find a C-grade pop metal band hiding behind her blackboard.  She was pretty sure she fumigated back there, and the exterminator claimed he only found and removed a nest of Kick Axes and chased away that one lone member from The Bullet Boys.


I'll Sleep with Anybody But The Bassist! 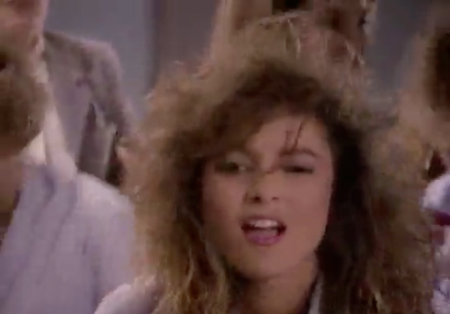 Britny Fox's wall of sub-KISS power chords super charges our girls and they instantly start sexy dancing while big hair sprouts from their heads like a majestic oak -- growing proudly in a forest full of beer cans and used condom wrappers. 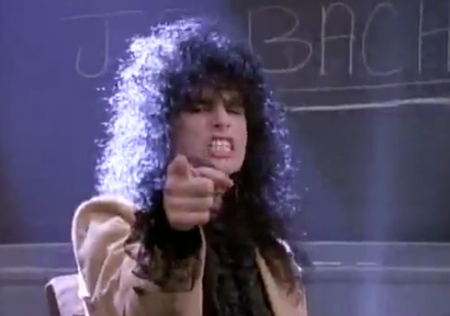 I honestly had a hard time picking out the best goofy frame for this guy.

Singer: How can we get famous, do you have any tips?
Manager: You need something that's your own.  A style, something people will recognize you for!
Singer: How about pointing?
Manager: That's a good start, but it needs something more.
Singer: I don't know!
Manager: I have an idea, can you make a face like your lips were torn off by an industrial thresher?

... and thus the greatest rock face of all was born.


I Did Not Just See That! 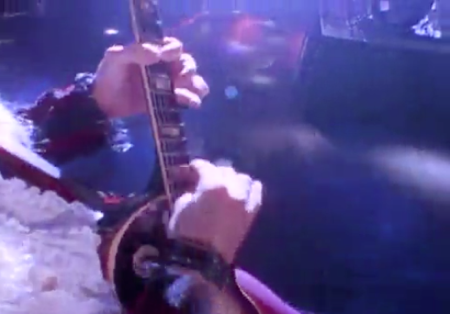 My favorite guitar solo from a 12th century courtesan.

Oh no you didn't!

You did not just tap with the pick!  We will not have this!  Back to remedial guitar solo class!  Until you learn what your pick is for, no more guitar solos for you!  Turn in the frou-frou shirt and coat you stole from that crazy guy in the Men Without Hats video!

We will not have pick tapping.  It's cheating!  Britny Fox deserves better than this ... OK, no it doesn't.  Continue on.


Even Moral Authority Can Not Stop the Rock 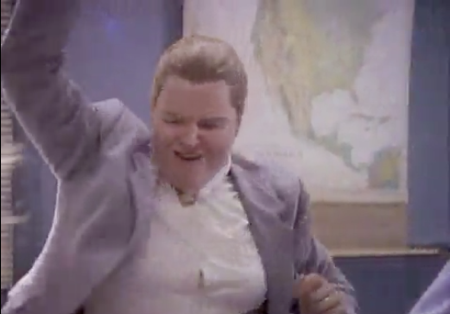 Our video ends with the teacher who before only understood Bach (it was the lesson of the day) fully converted to the wonder of a bunch of goofy guys with rudimentary skills from Pittsburg.  Who says the American education system is failing it's students?
Posted by Brian Barnes at 10:22 PM

I was surprised when the Brittney Foxx (I know that's not spelled right either-- arghh!) album first came out cuz it was like WTF, Cinderella haven't been around that long and they're already a major influence visually and screechily on the NOW metals.

Wikipedia says these guys got signed "thanks to their connection to Cinderella", so it's not surprising. Both PA bands.