In 1954, with the publication of Fredric Wertham's Seduction of the Innocent and the follow-up Senate hearings, the notorious 50s pre-code horror and crime comics came to an end.

Lesser know was the 1954 publication of Sedation of the Insolence, which had absolutely nothing to do with the cancellation of Count Skully's Crypt of Convenient Coincidence, a poorly constructed rip-off of more famous pre-code horror comics.  Nor did the Senate hearing on art of that year; nothing in Count Skully's was considered art even though the senate held a lengthy hearing on the worthiness of lincoln log sculptures by slightly blind one-armed howler monkeys.

In modern times, many comic art scholars -- most of whom are locked in mental institutions for slaughting their families with cake frosting spatulas (it took a while) -- Count Skully's is thought of as a lost gem.  The rest wished it remained lost, but if there's anything this blog is good at, it's uneathing things people wanted to remained buried.  Or burned.  Or maimed beyond recognition.  Well, too bad, we have space to fill.

For Halloween 2012, we will be presenting a complete scan of the Oct 1952 (#14) issue of Count Skully's Crypt of Convenient Coincidence. 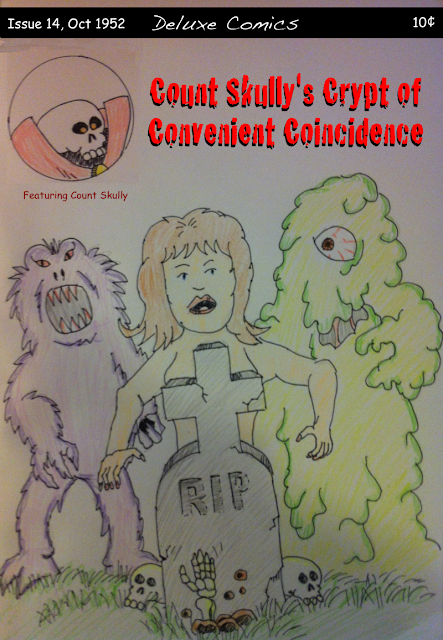